Tales from the front line 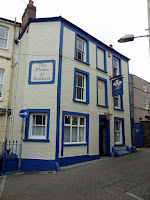 Last week I’ve been away for a few days in West Wales. Contrary to popular myth, a Mudgie holiday doesn’t mean an epic pub-crawl that isn’t complete without a night in the cells, but it does give the opportunity to visit a few unfamiliar pubs out there in the real world. I’ve written before how some beer bloggers seem to exist in an urban craft bubble and find their heads exploding when they find themselves in an ordinary pub out in the sticks used by non-enthusiast customers and have to cope with the dilemma of whether to drink Doom Bar or Draught Bass. This is never going to be a “what I did on my holidays” kind of blog, but I thought a couple of experiences were worth retelling.

I’ve often tended to regard CAMRA’s National Inventory of Historic Pub Interiors as a kind of informal Mudgie pub guide, that at best will lead me to unspoilt gems where the only sound is the chatter of a few old boys setting the world to rights, and in general to respectable, well-behaved pubs where I don’t feel unwelcome. But I have to say I was disappointed by the Plume of Feathers in Carmarthen. Yes, everything it says about the fabric of the place is true, plus there are the historical associations with heroes of boozing such as Oliver Reed, Richard Harris and Richard Burton. But, as a pub, it’s a serious let-down. No real ale (and no proper keg either, just smooth), deafening piped music and a clientele that seemed to consist mostly of barely-legal teenagers and local deadlegs. Given its situation right in the centre of the town, surely it has the potential to become something of a showpiece for Brain’s brewery.

Then, a couple of days later in Haverfordwest, a perusal of WhatPub? suggested that the Pembroke Yeoman, which was quite close to where i was staying, might be worth a visit. It is featured in the 2014 Good Beer Guide and had a previous local CAMRA Pub of the Year plaque on display. It seemed OK as I walked in, and I was pleased to see Hopback Summer Lightning on the bar. I ordered a pint, but my expectations immediately plummeted when I saw the barmaid plonk the glass on the drip tray and pull the pump with one hand to fill it. It must have taken at least fifteen pulls, during which she was distracted at several points by chatting to the customers. As I feared, it was hazy and totally devoid of condition, but not vinegary as such. In some pubs, you would take it back, but in a place that you’re unlikely to every visit again, it seems a bit pointless to cause a scene. And yes, I would have been far better going to Spoons, as I did the next night.

Having said that, I had my fair share of good pub experiences too. The Good Beer Guide listed Queens in Carmarthen, just round the corner from the Plume of Feathers, was a good, solid, traditional, wood-panelled pub where I would be happy to spend a lot of time. And I managed to fit in a visit to the legendary Dyffryn Arms at Pontfaen, which is really special and everything I had hoped it would be. It was rather amusing to see a party of normal tourists venture in and be totally fazed by the experience.

In one pub, there was a cardboard box on the bar of the kind normally used to hold charity sweets, but which happened to be occupied by a small dark tortoiseshell cat curled up and fast asleep. At first I thought it was a soft toy until it moved an ear. Now that’s the sort of thing you really remember about pubs.

And in another pub a local wag suggested that I looked like Inspector Morse, which I suppose is a kind of compliment. Far better than comparing me to Ronnie Barker or Elton John.