Lager in the doghouse 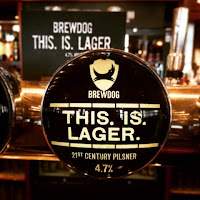 Last autumn, as reported here by Boak & Bailey, Wetherspoon’s with a great fanfare introduced keg Devil’s Backbone IPA and BrewDog This.Is.Lager into their pubs, and added both to the list of drinks allowed in their inclusive meal deals. This was seen at the time as a major step forward in the march of “craft keg” into the mainstream.

However, not everything seems to be going according to plan. Tandleman reports here how his experiences of This.Is.Lager have been inconsistent and lacklustre, something with which, having tried it a few times, I have to agree. It doesn’t seem to represent any notable improvement over the mainstream brands and isn’t a patch on the best German and Czech imports.

One theory that occurred to me is that, like many British-brewed “craft” lagers, it uses the wrong type of hops and thus fails to achieve that distinctive grassy note characteristic of authentic Continental lagers. However, others in the comments have suggested that it’s simply not turning over quickly enough and thus becoming stale. It’s probably a beer that needs to be served fresh for the hop character to emerge.

But its days seem to be numbered. On a visit to my local Spoons yesterday, it had been discounted to £1.99 a pint, and the barman said it was being dropped. If you think about it, it can only have ever appealed to a small segment of beer-savvy customers who weren’t single-minded cask drinkers. Unless it’s part of a meal deal, paying £3.10 a pint when cask is £2.30 is a large jump, and the “normal” lager drinker won’t see the point when they can get Stella, Kronenbourg or Carlsberg Export for a similar price.

Likewise, I can’t see them selling much Devil’s Backbone, and apparently in many branches that has already been withdrawn. The Wetherspoon’s “craft revolution” may have been a cunning plan to blunt the appeal of trendy craft beer bars in major cities*, but in Northern industrial towns I doubt whether it’s even caused a ripple, with all those bottles of Lagunitas IPA remaining in the fridge unsold. I was told that many branches only started shifting the cans of Sixpoint Bengali Tiger once they were discounted to 99p and thus started to score on the “bangs per buck” front.

Maybe this is another indication that Spoons need to differentiate their beer offer more between branches with markedly varying customer bases, rather than following a one size fits all approach. If “craft keg” really is to break out into the mainstream, it needs an instantly recognisable brand to lead the way and give a strong reason to visit. “We must go to the Aardvark & Artichoke, they have Frobble’s Funky Fizz on there!” Even Punk IPA may not cut the mustard as it is too strong. Or is this a sign that, as far as mainstream pubs go, we have now reached the high tide of “craft keg”?

Incidentally, on this visit to Spoons, a mixed-sex group of young people of somewhat studenty appearance came in. Their favoured tipple seemed to be some variety of purple-coloured fruit cider, and the craft beer taps and fridge remained firmly untouched.

* Spoons were never going to be a craft beer destination of choice, but amongst mixed groups the argument that “we’re not going there, they have no craft beer” would no longer wash, just as many pubs in the 1970s were persuaded to put real ale on again.