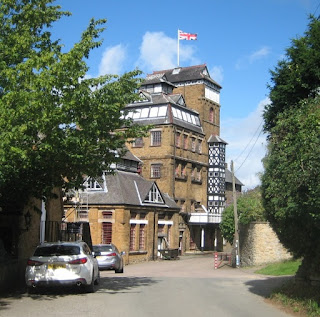 In the late Seventies, when I was at university in Birmingham, one of the most common beers to be found in the handful of free houses that had started to relieve the duopoly of Ansells and M&B was Hook Norton Bitter from Oxfordshire. It was a classic “country bitter” – distinctive, well-rounded, bittersweet, with a slight earthy note, which offered a very welcome contrast to our usual big brewery fare.

Fortunately, while many other of the family brewers of that era have fallen by the wayside, Hook Norton is still very much with us. It stands in the extreme north-west of the county, in the village of the same name a few miles west of Banbury. While it claims to offer “beer from the Cotswolds”, in fact it’s just outside the area generally regarded as bearing that name, and in fact is more in ironstone country, distinguished by the notably darker and redder hue of the local stone.

Hook Norton is a long, straggling village that is pretty quiet compared with some of the nearby Cotswold honeypots. At the west end is the area known as Scotland End, and at the side of the attractive Pear Tree Inn is a lane leading to the handsome Victorian tower brewery, dating from 1899. It’s a resolutely traditional affair, retaining a steam engine dating from the time of its construction that can still be used to power the brewery, and still using shire horses to deliver beer to local pubs.

Even if you’re not going on a tour, the brewery’s visitor centre is still well worth a visit. It includes a small museum covering both the history of the brewery itself and of the village and the surrounding area. I was interested to learn that the village used to by a major centre of ironstone quarrying and processing, served by a number of narrow-gauge railways, and that, before the introduction of mains water in the 1950s, the deficiency of iodine in the local water led to a disproportionate number of people in the area suffering from goitres. There’s also a café and a shop where you can pick up the full range of bottled beers together with other merchandise.

The current beer range comprises Mild, Hooky Bitter and the stronger Old Hooky as permanent beers, as well as a number of seasonals, of which Haymaker is perhaps the best known. Old Hooky was introduced in the late 1970s as a traditional dark old ale, and is listed as such in the Good Beer Guides of that time, but at some point in the intervening period was repositioned as a premium bitter, albeit definitely at the darker and sweeter end of the range. The company history recounts how the brewery used to enjoy a strong trade for their dark mild in working men’s clubs in Coventry and North Warwickshire which only eventually came to an end in 2000. Hooky Bitter remains one of the finest British balanced “ordinary” bitters, and indeed reached the final of my recent Twitter poll on the best of the breed.

The 1977 Good Beer Guide shows Hook Norton as having 34 tied houses, but the number grew slightly in subsequent years through the occasional purchase of additional pubs. Wikipedia says it currently has 47, but the brewery’s own website states 40, which is probably a more accurate figure. Some of the smaller wet-led pubs will have been lost, in towns as much as in the countryside, but this has been offset by buying up pubs in towns where there is likely to be more trade on offer. Both Hook Norton and Donnington now have pubs in the small South Warwickshire town of Shipston-on-Stour, as, indeed, do Brakspear. 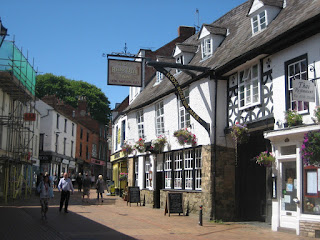 In Banbury, they have two pubs. One is the Olde Reine Deer (pictured right), historically a coaching inn, which retains the octagonal 17th century wood-panelled “Globe Room”, and has recently received a sympathetic refurbishment incorporating much dark wood and bench seating. The nearby Coach & Horses forms a sharp contrast as, while outwardly traditional, the interior has been remodelled in a rather stark modernistic scheme with loose seating and posing tables. Significantly, this was the only pub on my recent visit to the area where I had to return a cloudy pint. In another pub, I overheard some locals saying that what it needed to do was to concentrate on “basic food and basic beer”, which is very much what it doesn’t do.

Another noteworthy pub is the Elephant & Castle in the nearby village of Bloxham. This presents a rather forbidding, cliff-like aspect to the street, but once you pass through the archway you come to the main frontage of a very comfortable and welcoming two-bar pub. While in Banbury, I also visited the Wine Vaults, almost opposite the Olde Reine Deer. I remember this from a train trip while at University as a free house serving Marston’s, which was a long, narrow pub of great character with a stone-flagged floor and odd little wood-panelled snugs. Since then, it has fallen into the hands of Greene King and been dramatically remodelled. You can still see a faint echo of its original character around the bar, but otherwise it’s just another identikit pub.

Hook Norton makes an interesting pair with Donnington, another family brewer survivor, which genuinely is right in the heart of the Cotswolds. Donnington’s location and brewery buildings are arguably even prettier, and it has an estate of, externally at least, very handsome pubs in the distinctive local stone. However, few would deny that Hook Norton brew by some margin the better beers. They, and the brewery’s pubs, are well worth seeking out.