Two-thirds of the way there 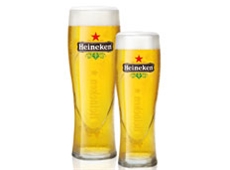 Alec Latham was recently musing on the subject of the two-thirds pint measure, which became legal in British pubs nearly six years ago, on 1 October 2011. At the time, I asked the question as to whether the “schooner” would float or sink. In practice, it seems to have been very much the latter. While they have gained some traction in specialist craft beer bars, they’re virtually never seen in the wider pub trade. I can only remember seeing one mainstream pub advertising their availability, and that was four years ago. Significantly, Wetherspoons, who are often seen as a bellwether for the trade in general, haven’t adopted them. In most pubs, if you asked for two-thirds, you would get a funny look and a pained explanation that they didn’t serve them.

Alec is quite right to make the point that a half never seems to quite give half as much satisfaction as a pint, and is often gone in much less than half the time. It’s just not a very appealing measure and, unless they’re doing it specifically so that they can taste more different beers, it’s rare to see blokes drinking halves in pubs. If they are, it’s usually something of a distress purchase triggered by lack of funds, lack of time or the fact they are driving. Ideally, they would prefer a pint. To put it in a blunt and politically incorrect manner, basically real men just don’t drink halves. They might be more attractive if they were served in oversize glasses, but that’s another story.

Obviously two-thirds measures make sense for the stronger beers that often feature in craft bars, where a pint may simply be too much. They are roughly in line with the 330 or 355ml bottles and cans that are popular for craft beers. But they also make sense for beers of more ordinary strength, where you just want “a glass of beer”, but a pint seems a bit too much, whereas a half comes across as a bit footling. On several occasions, I’ve ordered a pint only to find it was a bit lacklustre, and felt that I’d rather not have to drink it all. But ordering a half from the outset seems like an admission of defeat. However, as the measure has failed to take off in the general run of pubs, the option simply isn’t available. Maybe something of a pity, but a fact of life.

One deterrent, of course, is that in order to serve two-thirds measures, you have to have the appropriate glassware – either dedicated brim-measure or lined oversize two-thirds glasses, or pint glasses with a two-thirds line, or possibly specific measuring vessels. It’s not lawful to pour what you think is an approximation of two-thirds into a normal pint glass. And, given the investment needed to cater for something for which there doesn’t seem to be much demand, most pubs understandably have chosen not to bother.