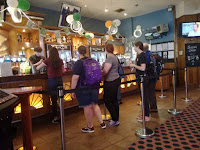 Martin Taylor has recently reported on encountering a Post Office-style queuing system in operation in Wetherspoon’s in Cheltenham, something I have never actually seen myself, but have heard about in other locations. At first sight, this seems like an unwelcome development that subverts the usual interaction between customers and staff across the bar, and certainly my Twitter followers weren’t very keen on the idea.

POLL: Queueing in Wetherspoons. Is it?

However, if you think about it, it does start to make sense in an establishment like Spoons. A bar counter is fine for getting your drinks handed to you immediately, and allows the customers to chat both to the staff and each other. However, in Spoons I’d guess that well over half of all orders include food, especially when you consider that many drinks will come as part of meal deals. As you don’t collect your food at the same time as ordering, the benefit of a service counter is much less, and it’s hardly surprising that cafés and restaurants in general take orders at tables. In the past, although it’s less common now, many pubs had a separate dedicated counter to order food so it didn’t get in drinkers’ way.

The typical Spoons has a very long bar counter and never quite seems to have enough staff, so with the best will in the world you can easily end up being served out of turn, and when it’s busy you may be in for a long wait. A queuing system makes sure everyone is served in order, and while it might not necessarily shorten the waiting time, it will make it more bearable, as you will be able to see clearly how long it’s likely to be before your turn comes. It will mean you won’t get stuck behind someone ordering coffees, as you’ll go to the first available member of staff, and it eliminates the problem of barflies hanging about and blocking the view of the pumps.

No, it’s not how a traditional pub works, and you do lose the contribution to pub atmosphere of interaction between staff and customers. But Wetherspoon’s aren’t really traditional pubs anyway, and in terms of how their business operates, queuing is likely to make things more efficient when it’s busy. If it takes off, you could even see the interiors of their pubs being redesigned with shorter bar counters divided into identifiable serving points, and display boards alongside the queue showing the food and drink menus. Maybe you could even separate ordering and collecting drinks, as in a McDonald’s drive-thru, so your drinks are ready when you actually reach the bar.

If anything, the Spoons smartphone app, which Boak and Bailey have written about here, undermines the traditional working of pubs considerably more than expecting customers to queue at the bar.