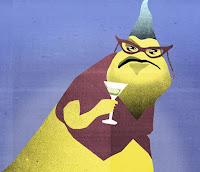 It’s taken as read amongst the beer writing fraternity that pubs, while they may be criticised for this or that, are unequivocally a Good Thing. However, out there in the wider world, this view isn’t necessarily shared by everyone, and over the years I’ve read a fair few articles by bien-pensant journalists arguing that pubs are, basically, well, a bit rubbish.

The latest effort is one by Marina O’Loughlin in London Eater magazine entitled Each to their Own, which was drawn to my attention by Boak & Bailey. This is a strangely schizophrenic piece in which, on the one hand, she accepts that pubs are just not for her, saying “Just because I don’t like something doesn’t mean there’s anything inherently wrong with it, just that it doesn’t work for me” , but then going on to level a list of criticisms against them.

Top of the list is that they “don’t serve good wine”, which comes across as spectacularly missing the point. As I said on Twitter, that’s rather like complaining about the lack of guitar solos in opera – it’s just not what pubs are about. Indeed, it could be argued that many, if not most, pubs don’t even serve good beer!

She goes on to describe pubs, with a metropolitan sneer, as being “offputtingly Brexity”. Well, I suppose you can sort of see what she means – pubs have always been a bit anarchic, rumbustious and politically incorrect, and you can understand why fastidious people might turn their noses up at them. I’ve said before that pubs, at heart, are more Sun reader than Guardian reader kinds of places.

It would be perfectly reasonable to argue that the rose-tinted view of pubs as cheerful, welcoming centres of community life is all too often not matched by the reality. But, if you basically see no appeal in pubs, then wouldn’t it be better just to keep quiet rather than moaning that they aren’t something they never set out to be in the first place? After all, I don’t much care for gyms or dance music clubs, but I don’t complain that you can’t get a good pint of bitter in them, I just ignore them.