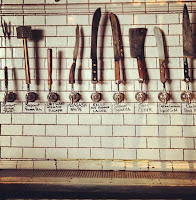 You would imagine that craft beer, with all its ebullience and self-confidence, would want to take on its competitors head-to-head in the market place. But, in reality, it chooses to differentiate itself so that side-by-side comparison is different.

On the draught side, it was always a cause of some discomfort amongst craft brewers that their products, in cask form, were dispensed by handpumps alongside the likes of Old Tosspot which exemplified the stuffy “real ale culture” they were seeking to challenge. So it was hardly surprising that they were keen to adopt “craft keg”, not just because they thought it was better, but also as a form of differentiation.

And, while craft keg facings may fit into the common T-bar dispenser, you’ll never find any craft kegs served through the towering, illuminated bar mountings that characterise Carling, Stella and the rest. Instead, the past few years have seen the rise of the “keg wall”, which is used to showcase a rotating range of craft products. In more and more recently-refurbished pubs, the draught beers are rigidly divided into three sections – real ales on handpump, macro kegs and lagers on tall fonts or T-bars, and craft kegs on a wall at the back of the bar. Many drinkers will look exclusively at one section and mentally blank out the others.

In the take-home trade, the craft sector has very much taken the 330ml bottle (and, increasingly, can) to its heart, in contrast to the 500ml bottle characteristic of Premium Bottled Ales and the 440ml cans in four-packs or slabs favoured by mass-market lagers. While many mainstream lagers are available in packs of smaller bottles, you never see them sold singly, and 330ml mainstream cans are virtually unknown. This makes direct comparison in terms of price per unit of volume, or indeed per unit of alcohol, much more difficult.

(As an aside, mainstream lagers seem to be sold in a bewildering variety of pack sizes, which seems to be a classic example of “confusion marketing”. How different from Germany, where pretty much everything seems to be in 500ml bottles and cans)

I’ve never been to the USA, so can’t comment directly, but I get the impression that craft beers there tend to be sold in the same package sizes and formats as mainstream ones, making direct comparison much easier. This article, for example, takes it as read that six-packs are the norm for both craft and macro beers. Yes, the craft costs more, but it’s very clear what the premium for higher perceived quality is. I can’t help thinking this may have been a key factor in its success.

It may come across as clever marketing that craft beer in the UK defines its own niche in terms of presentation and packaging. It’s not the same as macro lagers or BBBs, so why should it be sold the same way? But does it rather represent a shortage of ambition and a reluctance to take the fight directly to the enemy?