The old man and the pub 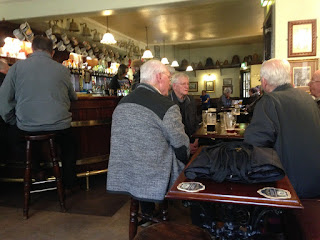 A phrase you often hear bandied about nowadays in a rather disparaging sense is “old man pub”. It refers not just to the clientele, but to a particular style of pub – broadly traditional, mainly wet-led, with dark wood in the décor, abundant, often fixed, seating and a compartmentalised layout.

However, it’s important to remember that there has always been an age divide in the customer base of particular pubs. The idea that there was a golden age when all ages mingled happily in the same pub is something of a myth. For long, there has been a general pattern that people use pubs frequently when they are young adults, but then start doing so a lot less once they settle down, start a family and try to climb the career ladder. However, once the children are off their hands, they have more time and fewer financial commitments, and the greasy pole no longer holds such attraction, they get back into the habit once more.

So, at any time over the past century, you would have found a divide between pubs with a predominantly young clientele, and those whose customers were more middle-aged and elderly. In Portrait of Elmbury, published in 1945, John Moore describes a classic “old man pub” in the Coventry Arms in his lightly fictionalised version of Tewkesbury, “which has a little back parlour where grave old citizens like to sit in semi-darkness and sip their beer and talk of old times while the shadows close in upon them.” And, while such pubs may not be to the taste of boisterous youngsters, is it such a bad thing that they exist?

Thirty years ago, the fun pub, primarily targeted at younger customers, was an established feature in most towns of any size, but as young people have tended to drink less, and in a different pattern, these establishments have largely bitten the dust. And what, nowadays, is the alternative to the “old man pub”? The gastro dining pub, which is mainly used by well-heeled older customers anyway? Or the family dining venue, which will certainly have some younger customers, but which footloose young single adults will do their best to avoid? Or the sports bar, where the lads might come in to watch the footy, but at other times be conspicuous by their absence?

While we’re seeing trendy “craft” bars springing up in many towns, their customer base is only a small subset of the whole age group, and only materialises at very limited times. Try going to Stockport Market Place on a weekday lunchtime and comparing the number of customers in the “old man” Boar’s Head with those in the Baker’s Vaults and Remedy Bar. Plus, it could be said that the micropub, given its typical clientele, is a modern recreation of the “old man pub.”

Surely all that an “old man pub” is, is a pub that has survived through the generations without bowing to every fickle wind of fashion. Obviously not every pub will appeal to everyone, but if you have a problem with them as a species, then it’s probably fair to say you don’t really care much for pubs at all.

The photo shows codgers chewing the fat in the Olde Blue Bell in Hull in May this year. “If it weren’t all for these medical treatments they have today, most of us’d be dead”, one said.