A fit of the vapers 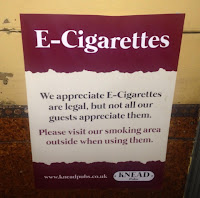 I spotted the sign on the right in the Prince Rupert in Newark, Nottinghamshire, which belongs to a small pubco called Knead Pubs. Similar blanket bans on e-cigarettes are commonplace, most notably in Wetherspoon’s, but the the faux-politeness of this one is particularly grating. It’s not much consolation to vapers that using e-cigarettes indoors is legal if the pub behaves as though it isn’t.

However, it illustrates a wider issue confronting public health policy. Despite indoor smoking bans and punitive taxation, smoking prevalence in society remains stubbornly reluctant to fall. In the past few years, though, there has been more sign of movement, which has been mainly due to the rise of e-cigarettes, or vaping. While many vaping devices do mimic conventional cigarettes, it is in fact somewhat misleading to describe them as such, as they don’t involve tobacco or combustion in any way.

It is clear that simply wielding a big stick is not an effective way of reducing smoking, and smokers need to be provided with an attractive alternative. However, the public health lobby has a big problem with vaping, not only because it falls into the category of “not invented here”, but also because it can be an enjoyable activity in its own right, not just a joyless smoking cessation therapy. The result is that they have been reluctant to endorse vaping, and indeed by going on about how its risks still need further investigation are in effect telling people to continue smoking, which comes across as an extremely callous attitude. No activity is entirely without risk, but it is pretty self-evident that the health risks of vaping are lower than those of smoking tobacco by several orders of magnitude.

It seems, though, that at last the public authorities are realising that encouraging vaping is likely to be the most productive way of cutting smoking rates, and this has been recognised in the government’s latest anti-smoking campaign, which is reported to involve urging millions to switch to e-cigarettes. But there is a lot of prejudice to be overcome from organisations, both public and private, that have found it all too convenient to treat vaping in exactly the same way as smoking. For example, I recently travelled on the Isle of Wight ferry, where both smoking and vaping had been banned completely on any part of the vessel, even outdoor deck areas.

Government, both national and local, and public bodies such as the education sector and the NHS, need to set an example by ensuring that the blanket prohibition of indoor smoking is not extended to vaping. If vaping is made no more convenient than smoking, then where is the encouragement to switch? And, while the principle of “my gaff, my rules” must always prevail, it should be made clear to commercial organisations such as pub operators that imposing blanket bans is distinctly unhelpful in terms of public health and, in effect, is indirectly killing people. The Welsh government’s plans for a ban on indoor vaping identical to that on smoking must be consigned to the scrapheap.

But the idea of vaping as a valid recreational pursuit is likely to be very difficult for many in authority to accept...