The ups and downs of pubs 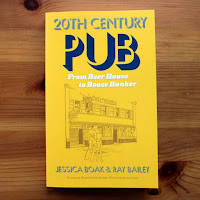 There have been plenty of books written on the history of the British pub, and for the most part they cover the same ground. They run through the great days of the coaching inns, the Victorian Beer House Act, the Edwardian gin palaces and Lloyd George’s temperance campaign, possibly getting on to the inter-wars improved pub and the Bolton Mass Observation studies. But, after that, they tend to peter out and go strangely quiet.

This gap has now been remedied with 20th Century Pub by Jessica Boak and Ray Bailey, well-known beer bloggers and authors of the widely acclaimed Brew Britannia, a study of the rise of British beer enthusiasm. This is a comprehensive survey of the development of pubs since 1900, beginning with the temperance pressures faced by brewers in the early years of the century, and moving on through the genteel improved pub, theme pubs, Irish pubs, gastropubs and Wetherspoon’s to end up in the modern-day but oddly old-fashioned environment of the micropub.

It’s organised thematically, with each chapter closed by a visit to a pub that exemplifies its topic. Most of these, in their different ways, are still thriving, a sombre exception being Marples in Sheffield, where 70 people died in a Luftwaffe raid in 1940 while sheltering in the cellars. It was rebuilt after the war, but the replacement itself is no more. Especially interesting is the chapter on the origins and development of the much-maligned estate pub of the post-war era. Will we come to cherish the few survivors in the same way as we now do the inter-wars pubs?

The book has clearly involved a lot of intensive research in archives and press clippings, especially in the earlier chapters which have more of a historical feel. It is also enlived by many anecdotes from people with direct experience of the various themes covered, so a number of names crop up that are already familiar from Twitter and the beer blogosphere. In the chapter on gastropubs, there’s even a quotation from a letter sent by one Peter Edwardson of Stockport to What’s Brewing, which adopts a familiar curmudgeonly tone:


We have all come across pubs which have effectively turned themselves into pretentious quasi-restaurants, with blackboard menus offering a julienne of this and a ragout of that at £8 a time, which no doubt make their own stock, and where a request for brown sauce would be met with a supercilious sneer.

During the writing of the book, I was involved in one or two e-mail exchanges with the authors on various points, and it’s good to see this recognised, and my true identity “outed”, in the acknowledgments section.

A recurring theme is the constant tension between the desire to reform and clean up pubs, and the opposing tendency to see them as places for people to let their hair down where the normal rules can be relaxed. Allied to this is the enduring attempt by brewers and operators to impose particular formulas on pubs, which all too often end up making them somewhat sterile, and are eroded by the conflict with warts-and-all reality. As they say in their conclusion:


Which leads us to the second challenge, the flipside to the first. The story of the pub in the 20th century is of concerted efforts from every angle to do away with ‘the mere drink shop’ by going upmarket, on trend, or both. This has undoubtedly led to many improvements – few people would want to go back to spittoons or outside toilets. But the chasing of respectability and relevance has seen breweries and pub companies apply superficial characteristics in a desperate and inauthentic attempt to win new custom. We’ve seen in the course of this book how the trade tends to be a relentless follower of fashion, leaping on whatever bandwagon is currently in town – Victoriana, theme pubs, real-ale joints, gastropubs, craft beer – but it so often fails, or at least fails to endure. There are few sights bleaker than a would-be upmarket pub all dressed up to impress only a handful of bewildered customers left over from the old days; with tea-towels draped over its redundant craft beer taps; with the menu sliding week by week away from gastro and towards the microwave while the chef twiddles her thumbs.

The book is intended to be a historical and sociological survey, not a polemic in the style of Christopher Hutt’s Death of the English Pub and the authors, while not fighting shy of expressing opinions, do not treat it as a soapbox. They offer a very balanced account of the debate surrounding the very obvious decline of the pub trade in recent years. On one particularly fraught issue, they report that:


...a 2012 survey by the trade journal the Morning Advertiser found that nearly half its readership felt that the smoking ban had had ‘a significant impact’, and we have spoken to publicans who say, quite matter-of-factly, that they certainly noticed a marked decline in footfall when it was introduced.

and go on to say:


If when people talk about the death of the pub they mean of specifically this type – primarily working-class, drink-led, male dominated pubs – then the argument that the smoking ban is significantly to blame for the decline gains credibility.

Not surprisingly, they end up with an upbeat conclusion that “we feel unfashionably optimistic for the pub”. I have to say I’m not so sure. It faces pressures from various sides which to my mind add up to an existential threat, and my fear is that we still have a lot further to fall. Pubs and bars will never entirely disappear, but we could end up seeing them occupying a very limited, niche role that is completely irrelevant to most people. In some areas, and amongst some sections of society, this is already the case.

Like pretty much every other writer about pubs, the authors do not really recognise the long boom in the pub trade between about 1960 and 1980, a period during which British beer production almost doubled. It is this that gave brewers the investment funds and self-confidence to create the often bizarre and short-lived theme pubs – they were a sign of hubris, not a desperate reaction to falling sales. It’s ironic that Hutt wrote his famous polemic at a time when the pub trade, at least in financial terms, was thriving.

There’s also a significant gap in recent years, with no mention of the rise of the new-build family dining pub, which arguably is just as important a development as Wetherspoon’s but, lacking a single identifiable banner, and tucked away on peripheral retail parks, hasn’t attracted anything like the same column inches. My rather ordinary home town of Runcorn has one Spoons, but it now has three of these. Maybe they, combined with Wetherspoon’s, represent the transformation of the traditional drink-led pub into the food-dominated “prub” referred to in an MP’s speech they mention in a recent blogpost.

However, these are omissions, not errors. It’s a thoroughly-researched and intelligently written book that nevertheless maintains a lightness of tone that prevents it becoming turgid even when the subject-matter is serious. It’s a must-read for anyone with an interest in pubs beyond just drinking in them, and is one of those books that you will return to and re-read sections again and again.

I have a couple of quibbles about the physical book itself as opposed to the contents. The first is that the text is left-aligned rather than justified, which to my eye gives a slightly low-rent feel and makes it marginally harder to read. And, while I’m well aware that books aren’t sold by the word, the cover price of £16.99 seems a little steep when compared to similar volumes. Brew Britannia, which is about the same size and format, and was published only three years ago, was £12.99. Still, no doubt it will be available at a lower price from various Internet vendors.

Disclosure: I was sent a review copy of this book by the publishers. As it is a book I would undoubtedly have bought anyway, I have made a donation of £10 to the Royal National Lifeboat Institution, which is a cause that I and my family have supported for many years, and was also suggested to me by the authors.