Over the Christmas weekend I learned that two more Stockport pubs were to close their doors in the new year. While neither could be said to be conspicuously thriving, they hadn’t appeared to be obviously on their last legs. 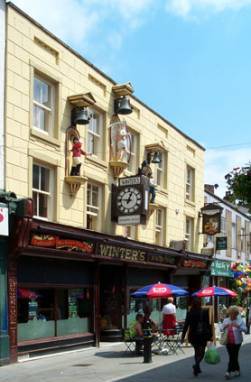 First is Winter’s on Little Underbank at the bottom of Hillgate. This was a former jeweller’s shop that was converted to a pub by Holts in the early 1990s. They retained the distinctive facade with its automaton clock, although this was no longer in working order. The interior was smartly fitted out on two levels, and initially they hoped to cultivate an upmarket ambiance and attract food trade. Sadly, this was not to be and, maybe in line with the decline of the surrounding area, it steadily became the haunt of some of central Stockport’s more downmarket pub clientele, says he politely. On several recent visits there has been karaoke in full swing, with a distinctly lively atmosphere.

Apparently it has been bought by Stockport Council and is expected to close during January. It presumably forms part of their plans to regenerate the Lower Hillgate and Underbanks area which, as I said in my recent post about the new Redrock entertainment complex, surely has the potential to become a cornucopia of independent businesses. However, they’re faced with an uphill struggle, as currently it’s very tatty and rundown, with as many vacant units as open ones. This will reduce the number of pubs on the famous Hillgate Stagger serving cask beer to a mere six, whereas I can remember as many as sixteen thirty years ago. 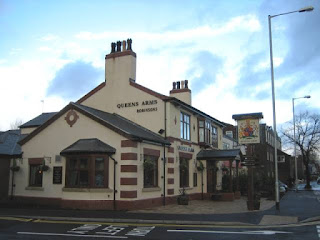 The second is the Queen’s Arms, a couple of miles away in Cheadle. This was once a traditional multi-roomed local that had the distinction of serving the rare Robinson’s “ordinary” bitter. However, towards the end of 2006 it was greatly extended and internally drastically remodelled, removing most of its previous character and leaving it feeling rather soulless. I wrote about it in my column in January 2007* in uncomplimentary terms, focusing on the dearth of fixed bench seating.

In hindsight, that wasn’t a very auspicious time to be spending a lot of money on a pub, and it never seems to have repaid the investment, although I wouldn’t have immediately named it as a prime candidate for closure. On the occasions I’ve been in, it’s never been particularly busy, and there have been reports of it becoming a magnet for trouble, with one incoming licensee having to bar a long list of customers.

It’s an attractive building in a good location, but it seems to have suffered from falling between two stools. Is it a sports pub, or an eating pub? You can’t really combine the two – you have to be one or the other. The substantial site may be one reason behind its closure, and there is an unconfirmed rumour that it may be turned into a drive-thru McDonalds. There are two other Robinson’s pubs nearby – the Printers Arms and the Red Lion – both of which I would say have a more congenial and “pubby” atmosphere.

Maybe neither pub will be hugely mourned, but the fact that they are going underlines just how fragile the general pub trade remains at present. I don’t want to put the kiss of death on any pub by mentioning it by name, but I can think of quite a few others that give the impression of living on borrowed time. Plus the prominently-situated George, opposite Debenhams on Mersey Square, is currently closed once again with an uncertain future.

* incidentally, since I wrote that piece, the Griffin at Heald Green has received a further revamp which involved the removal of the public bar and has left it much less pubby and overwhelmingly food-oriented