Life outside the bubble

“How about a trip to Crewe?” suggested Ian Woosey aka Hardy on the Beer and Pubs Forum. “There’s a couple of National Inventory pubs I want to tick off there.” My first reaction was that it didn’t sound the world’s most promising destination, but a bit of research revealed that there was enough there to make for a worthwhile day out, so we duly set out on a bright but chilly sunny morning last Thursday. We were also met by Paul Mudge from Stafford and Jon Benger, who had made a very long round trip from Frome in Somerset, albeit at a bargain price of only £17.50. 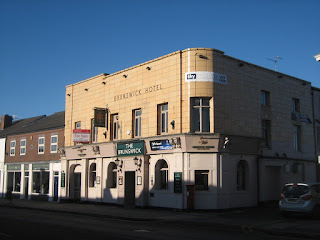 Crewe grew up in the 19th century around the railway works, and has an oddly sprawling layout with the main part of the town centre a good three-quarters of a mile north of the station. It still has extensive areas of Victorian terraced housing, although with rather fewer street-corner pubs than there once were. Near the station there is a strip of shops, restaurants and a few pubs along Nantwich Road. We passed the handsome 1930s tiled facade of the Brunswick Hotel, currently up for sale by Greene King for £235,000 freehold, before arriving at our first stop, the Beer Dock. 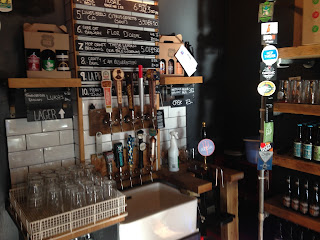 This is a new off-licence-cum-bar in the modern style, where the downstairs seating just comprises one row of tables and benches down the middle of rows of shelving on either side. There’s also some more seating in an upstairs room. It has a very wide range of bottled beers including an impressive German selection, but oddly no prices are displayed either on bottles or shelf edges. The bar offers a number of “craft kegs” plus a solitary cask beer, on this occasion Neptune Aegir Pale, priced at a very reasonable £3 a pint. It was tasty enough, although a touch hazy. You have to commend their enterprise, but it wasn’t to my mind a very congenial place to linger over a drink. So look forward to it appearing in next year’s Good Beer Guide. 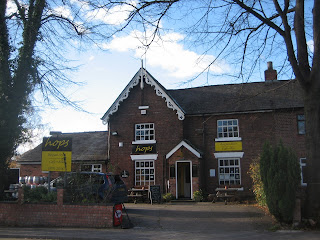 A long walk north along Edleston Road brought us to Hops on Prince Albert Street, which has been a fixture in the GBG for a number of years. Outwardly resembling a private house, this is a modern bar which nevertheless has a fairly pubby interior with an L-shaped bar on the left and plenty of comfortable seating including a few benches. It has a very large selection of imported, especially Belgian bottles, and six cask beers on handpump. Of these we had Northallerton Gundog Bitter, Beckstones Black Dog Freddy and Coastal Proper American Pale Ale, all of which were pretty good. As they don’t serve meals, it was quiet at lunchtime, but I suspect it gets much busier in the evenings. Of the pubs in the town centre this would probably be my favoured choice for a drink.

Only a few doors along the same street is Albert’s Corner, which has the look of a 1930s public building, and indeed we discovered that it had originally been the Crewe Labour Exchange. Christmas decorations were already up in the very spacious interior, which had a mixture of posing tables and bench seating. There were three cask beers on the bar – Beartown Brown Bear, which was very good, Salopian Darwin’s Origin, which was OK, and Titanic Cappucino Stout, which unfortunately turned out to be on the turn, but was replaced without demur. The main purpose of coming here was lunch, and we weren’t disappointing, choosing from an extensive and reasonably-priced menu covering snacks and full meals. The others had fish and chips and a steak wrap, both of which were pretty good, while I went for lasagne with garlic ciabatta, which was advertised as a “light bite”, but was a substantial portion and a very appetising take on a dish that can often be a touch dull and bland. Possibly with the imminent closure of Crewe’s Wetherspoons they will attract more dining trade.

A ten-minute walk west along Wistaston Road past the closed Park and Earl of Chester led us to the Hop Pole, the first of the two National Inventory pubs, and also a current GBG entry. A little opening-out, including knocking holes in one of the internal walls, means that it only qualifies for regional rather than national status, but it remains a splendid traditional multi-roomed pub. There’s a central bar with glass shutters, no longer actually in use, surrounded by a quarry-tiled public bar, a front pool room and a long lounge at the rear with alcoves of comfortable seating upholstered in a bright tartan pattern. 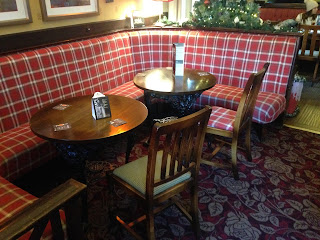 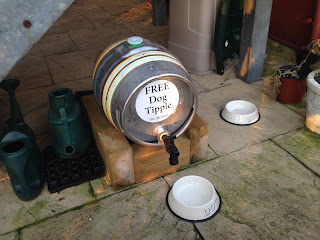 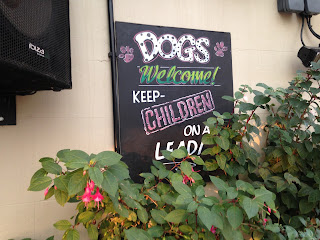 The pub has its own bowling green at the back which in the summer is busy with teams playing in various leagues, and also shows an unusual level of concern for our canine friends. There were two real ales available, Moorhouse’s Pride of Pendle and Weetwood Cheshire Cat, both in good nick, with a cask of Bradfield Farmers Blonde waiting in the cellar to come on. A blast from the past was M&B Mild spotted on keg. We received a friendly welcome from the landlady and chatted with her about various topics including particularly pubs in Uttoxeter. All in all a classic community local that for me was the highlight of the day.

Retracing our steps back to the town centre, we took a look inside the Crown, a former Robinson’s pub, but spotted no real ale, so doubled back a little to the Cheese Hall, owned by Amber Taverns. This is a spacious modern pub with a number of large TV screens, but did feature plenty of comfortable bench seating, and had Robinson’s Dizzy Blonde and Hobgoblin on the bar, both of which were good. Clearly you can successfully serve cask beer in a contemporary style of pub if you do it right. Three and a half pints came to a very reasonable £8.37 – presumably the cask beers are £2.39 a pint. The pub was visibly filling up in the late afternoon.

We crossed the bridge over the West Coast Main Line on the eastern fringe of the town centre to reach the King’s Arms, the second National Inventory pub of the day. This one only qualifies for “some regional importance” status, partly because its most recent refurbishment has treated the interior to an unsympathetic pastel blue colour scheme. However, it still has a multi-roomed layout including a lobby area by the main bar counter, a rear pool-cum-function room, a snug in which an elderly lady was sitting in semi-darkness, and a spacious public bar at the front with a distinctive glazed door with the inscription “Games Room”. Initially we only spotted the Bombardier handpump on the back bar, and only saw that they had Tribute once we had taken our drinks through to the public: both beers were pretty good.

Opposite the King’s Arms and almost on top of the railway bridge is the Borough Arms, which is Crewe’s original multi-beer free house and a long-standing Good Beer Guide entry. It doesn’t open until 5 pm on weekdays which rather dictated the order of the crawl. It has an L-shaped one-room interior on several levels with a rather hard to spot step between two sections which must have caught many drinkers unaware over the years. We sat in a snug area at the rear with a number of wooden settles, but unfortunately on a cold night there was something of a lack of heating in this part. There’s another seating area downstairs which we didn’t venture into. There were ten handpumps on the bar including Oakham Citra and Inferno and Otter’s Remembrance special Poppy Otter, but we were all drawn to the Harvey’s Sussex Bitter which did not disappoint. I can’t say I paid much attention to the keg lineup but I did notice the rare Manns Chestnut Mild.

From here it was a rather long and chilly walk back to the station for the return train to Stockport. In summary, an excellent day out, much better than I’d imagined when the idea was first mooted, with plenty of good beer and good conversation. Crewe is never going to win any awards for historic townscape or become a major beer destination, but this illustrates what can be found in somewhere often perceived as an ordinary, workaday town. And it must be remembered that it’s in places like this that most people in the UK live and do their drinking. However, you can imagine some bleeding-edge crafterati struggling to understand the appeal of a place like the Hop Pole.