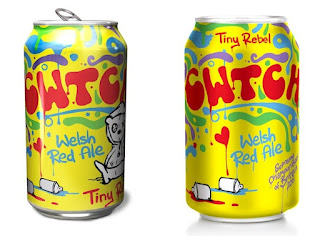 Regular readers of this blog will have realised that I don’t have much enthusiasm for selling beer in “child-sized” 330 ml cans, or for adorning them with vibrant psychedelic colours. But that doesn’t mean I gained any pleasure from the decision of the Portman Group to require Tiny Rebel Brewery to change the design of the cans for their Cwtch Welsh Red Ale on the supposed groups that they had undue appeal to under-18s. And nor, it would seem, did my Twitter followers. That’s by far the biggest response I’ve ever gained for any Twitter poll.

POLL: Were the Portman Group right to censure @tinyrebelbrewco over their "juvenile" can designs?
— Ebenezer Mudge 🎅 🍻 (@oldmudgie) December 12, 2017

Of course it’s something that is open to debate, and several voices were raised in the beer world arguing that the decision seemed reasonable enough, for example by Boak & Bailey.

The full text of the adjudication, including Tiny Rebel’s exhaustive attempts to defend their position, can be read here. The brewery have now responded in detail to their decision, setting out clearly their concerns about the potential wider implications.


We’re not the victim here. The industry is.

This sets a precedent, but the boundaries on that precedent aren’t clear and the decisions are enormously subjective, and take in a very limited view of the world. How the hell do you not appeal to under 18s?! There is no clear difference between what is and isn’t allowed, and that’s a major problem.

It forces companies to be over-cautious in design, which is inherently limiting. Instead of designing something for what consumers would like, companies have to design bearing what the most prudish among us wouldn’t like.

Taken in isolation, the matter is relatively trivial, and it doesn’t stop anyone from selling or drinking a can of Cwtch. The photo above clearly shows the relatively minor nature of the changes that were required. But the case does raise a number of more general issues.

The first is that the investigation was triggered by just a single complaint. Can we be confident that was from a genuine member of the public rather than some purse-lipped professional health zealot? And is it reasonable that one vexatious miseryguts can cause a relatively small business having to incur – as they say themselves on their site – costs in excess of £31,000? The potential scope for mischief is boundless.

It is absolutely clear than there was no deliberate intention on the part of Tiny Rebel to target children, and is it really credible that any child would genuinely mistake it for a soft drink? One point made in the adjudication was that 330ml cans are widely associated with soft drinks, but they have been used for many years for beers such as Gold Label and Mackeson, and are now commonplace for craft beers. The major soft drink brands tend to use minimalistic designs highlighting the brand name and completely eschewing cartoon characters. Might we see in future particularly types and sizes of packaging being mandated for alcoholic drinks to distinguish them from soft ones?

It’s also not hard to see this as a baby step on the road to plain packaging for alcoholic drinks, as suggested on Twitter:

Drip, drip, drip: https://t.co/OadTbFqSgW … The anti-alcohol brigade take another little step towards their next goal of plain packaging, with the foolish connivance of Portman Group. You weren't the target @tinyrebelbrewco , just a minor casualty in a much bigger campaign.
— Huish Hugh (@HuishHugh) December 11, 2017

The restrictions on what is acceptable are likely, slowly but surely, to become ever tighter.

As explained in Tiny Rebel’s response, the Portman Group is a self-regulatory organisation set up and run by major alcohol companies. Some have suggested that it constitutes a kind of restraint of trade by seeking to stifle the innovative efforts of smaller producers. I’m not really convinced by that, but it’s a funny kind of self-regulation where you’re subject to its judgments even if you haven’t signed up to it. If large companies avoid its censure, it will be because their marketing departments are more savvy as to what will pass muster. But it does have form in cracking down on tiny breweries over the same kind of issue.

Several people have made the point that surely self-regulation is preferable to a system imposed by government. But the question has to be asked as to how far industry should be prepared to undermine its own business on a voluntary basis. We have already seen this with the drinks industry having its arm twisted to reduce the strength of popular beers and ciders, and the food industry being pressurised to reduce the sugar content of soft drinks, confectionery and cereals, often at the expense of taste. If you’re going to be crucified anyway, it’s little consolation that you’ve been allowed to build your own cross.

Alarmism? Scaremongering? Yes, these points may at present only be straws in the wind. But they will need to be carefully watched in future to see how far we end up going down the road. And we have already seen it all unfold before our eyes with the regulation of tobacco products.