But where are the customers? 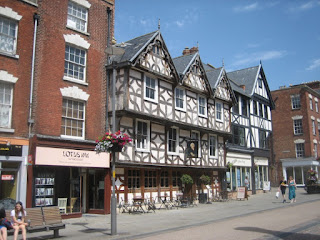 At the end of June, I spent a few days in Cornwall, and on the way back stayed for a night in Gloucester. While I was there, I called in to Sam Smith’s Robert Raikes’ House, which is situated on one of the main shopping streets in the city centre. This is a magnificent 16th century half-timbered building that in recent years has been very carefully and lovingly converted to pub use.

It was a sunny Saturday lunchtime, and the pub looked very appealing with boards outside advertising that it was serving food. Yet it had no more than a thin scattering of customers, when Sam’s pubs in similar central locations in Stockport, Leeds or Chester would be heaving. This has also been observed by Martin Taylor. Boak and Bailey have described Sam’s William IV in Bristol, another impressive historical building, as “a pub which rarely has any atmosphere at all.” So you have to ask what is the trick Sam’s are missing.

First is the question of price. While Sam’s are noted for their low pricing policy, they apply a set of three or four fixed price bands dependent on geographical area, which don’t necessarily correspond to how affluent a particular place is. Old Brewery Bitter in this pub was £2.80 a pint, which may be about the cheapest in central Gloucester apart from Wetherspoons, but isn’t the outstanding bargain that £2 is in the North. Gloucester isn’t by any means the most well-heeled of cities, and overall is probably less prosperous than Chester.

The low prices aren’t just a matter of luring customers in purely on value for money. Once people have been tempted over the threshold, they find a distinctive ambiance that creates a critical mass of like-minded drinkers and that particular Sam’s atmosphere. It may not be to everyone’s taste, but in many places in the North it’s a very successful formula – you know what a Sam’s pub in going to be like.

There is also the issue of the unfamiliarity of the brand. In the North, Sam Smith’s is a well-established company that has been around for decades if not centuries, and the name will be familiar to most pubgoers. In the South, they’re not known at all, something that is compounded by their policy of only offering their own brand products across the entire range of drinks and snacks. The barmaid in the Robert Raikes very carefully and accurately explained to a customer the difference between the four Sam’s lagers, but in most pubs you don’t even have to ask because you will recognise some of the brands on the bar.

Plus you have to consider how the building actually works as a pub. I have written previously how Sam’s very careful remodelling of the Swan in Holmes Chapel had actually ended up too compartmentalised for its own good, with the bar tucked away in one small room right at the back of the pub. And in fact that particular pub is currently closed, and has been for some time.

Of course there is much to be said for pubs having a variety of distinct areas, but they also benefit from a substantial circulation and seating area close to the bar to promote a sociable feeling. The Robert Raikes isn’t as bad as the Swan, but even so the servery is situated in one room in the centre of the pub that doesn’t directly open on to any other rooms apart from the central corridor. It also has the toilets up a flight of stairs that Wetherspoons would be proud of, which could be another factor that older customers find offputting.

Sam’s deserve praise for taking on premises like Robert Raikes’ House and converting them to pub use in a manner that respects their fabric, and where no expense has clearly been spared. There are examples in a number of other cities – the Wortley Almshouses in Peterborough spring to mind. But, for their own sake as much as the customers’, they also need to have a look at their pricing policy and the circulation of people within the building, to make sure they actually succeed as pubs and not just as pieces of architectural restoration.