Stubbing out the habit 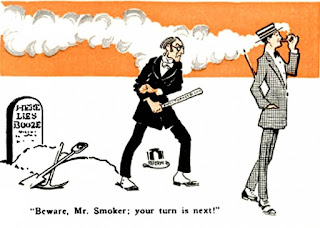 The government have, perhaps rashly, pledged to end smoking in England by 2030, as part of “a range of measures to tackle the causes of preventable ill health.” If this was some kind of infectious disease, that might be a reasonable objective. However, let’s think about this a little more deeply. While it is known to carry significant health risks, smoking is a legal activity that large numbers of people enjoy. Many of them don’t actually want to quit, as Pat Nurse explains in this article. And, if they are adults in full command of their mental faculties, why should they? Many commentators seem to forget that, whatever the risks, smoking is a very soothing and relaxing activity.

There are plenty of other activities people engage in that carry substantial risks of death, injury and ill-health, but the government seems happy to tolerate them, possibly because it would be seen as politically incorrect to criticise them. Prejudice against people on a wide range of grounds has now rightly become socially unacceptable, but it seems that much of that bile has now been redirected against smokers.

The plan doesn’t seem to involve outright prohibition, just an ongoing campaign of denormalisation and exclusion of smokers from more and more public places. However, while that may apply a continuing downward ratchet on smoking levels, it’s not going to eliminate it entirely. People would still be able to import tobacco or buy it on the black market, and smoke it in private homes or secluded areas. Even outright prohibition wouldn’t really work, as it has been so notably unsuccessful with various kinds of illegal drugs.

Of course we now have the means at our disposal to achieve a substantial reduction in smoking, by encouraging vaping as an alternative. However, this tends to be pooh-poohed by the public health lobby, both because of “not invented here” syndrome, and because it is often espoused as a recreational activity in its own right rather than simply a smoking cessation therapy. Indeed, some countries such as Australia have banned vaping altogether while continuing to tolerate smoking, which by any reasonable calculation is surely considerably more dangerous. 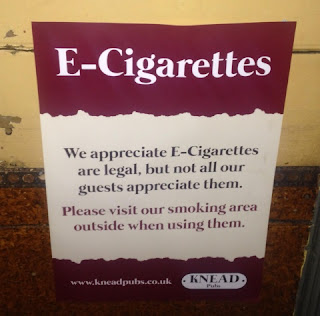 As has often been said, the Stone Age didn’t end because we ran out of stone, but because something better came along. The same could be true of smoking and vaping, but it’s not going to be achieved unless the government takes a markedly more positive attitude towards vaping. The licensed trade could also play its part by ceasing to take such an absolute and dim-witted attitude – Wetherspooon’s, I’m looking at you! But it’s much easier just to continue to demonise smokers, and all too readily lump vapers in with them.

There’s currently a lot of talk of legalising, or relaxing the prohibitions, on cannabis, but it would be interesting to know how many of those who support these campaigns at the same time also want to see a further crackdown on smoking, something that comes across as a distinctly hypocritical stance. Apparently the US state of Colorado, which has legalised recreational cannabis, has passed an ordinance preventing employers from discriminating against cannabis users. But they haven’t done the same for smokers, or drinkers.

Of course, some will say, smoking is a special case, something uniquely harmful, and these tactics are never going to be turned against any other activity. Or are they? The cartoon at the top is borrowed from this blogpost by Christopher Snowdon, but it seems that nowadays the tables have been reversed. If we can eliminate smoking by 2030, then why not fatty and sugary food by 2040, and then alcohol by 2050?