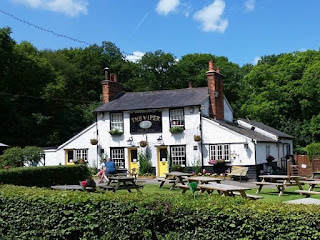 Spectator Life magazine recently published a feature on the best country pubs within touching distance of London. I posted on Twitter that you just knew what kind of pubs these were going to be, and I wasn’t wrong, as they were, entirely predictably, the type of places where “Mouth-watering mains include whole Roast Grouse with Game Chips & Bread Sauce and Venison Steak with Quince Jelly & Blue Cheese Mashed Potato.”

So I invited suggestions for some genuinely unspoilt and characterful pubs that would fit the bill better, and the results are shown below. I haven’t made any attempts to vet the list and they are presented as given to me. The only ones I’ve actually been to are marked with a *. In particular, I really don’t know rural Hertfordshire and the southern part of Essex well at all. The preponderance of pubs in these two counties is, of course, maybe driven more by who responded than being an accurate reflection of the relative quality of the pub stock in the various areas. I’ve provided links for some that people waxed particularly lyrical about. Initially, nothing was suggested in Buckinghamshire, but I’ve now added a couple from the comments.

This one – the Green Man at Sandridge – certainly sounds a world away from the kind of pub listed in the original article:

Yes. Some money's been spent on the interior and dogs are now allowed in. A condition-perfect pint of Side Pocket costs £3.70. It heaves with decoraters, sparkies, chippies, builders and plumbers.

Something I’ve observed before is that traditional country pubs with a substantial wet trade seem to be much more prevalent in the South of England than the North, and an attempt to come up with a similar list for Cheshire and Lancashire would, I think, yield pretty slim pickings.
Posted by Curmudgeon on September 11, 2019