We pick up the story of our Proper Day Out in Preston having just left the Olde Blue Bell and retracing our steps along Churchgate towards the city centre. We turned right along Lancaster Road, passing between the actual Guild Hall, a modern edifice on our right, and a row of impressive Victorian civic buildings on the left. This brought us to the Guild Ale House, described as “a larger than average micropub”. It also has longer than average hours, being open from noon every day to 11 pm most evenings. 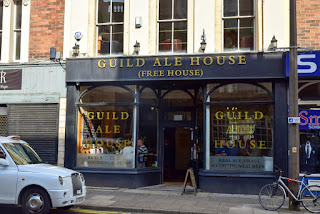 It has a main bar area with posing tables, a more comfortable snug to the rear where we were able to find some seats, and also an upstairs seating area reached by a Wild West saloon-style open staircase. There were seven cask beers on offer, from which we chose Lancaster Blonde, Blackedge Cascade APA and Bank Top Swan Lane Mill. The latter was an amber-coloured beer which was in good condition but had a distinctive liquorice flavour that wasn’t to my liking.

We then had a long but fortunately level walk up North Road, passing the New Meadow Street Labour Club where people in the outside drinking area at the front were obviously enjoying their Friday afternoon in the sun. I’m sure if Life After Football had been with us he would have wanted to dive in for a swift pint. Eventually we reached our next port of call, the Moorbrook, which is now the solitary pub on a road junction where there used to be several others. Here we stragglers at last caught up with the rest of the party. 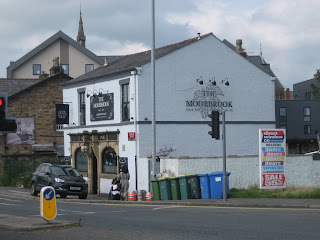 It has a distinctive frontage with arched, single-light, frosted windows on either side of the entrance door. Inside the bar is on the right with two snug areas with bench seating to the left. There is also a small beer garden at the rear. Once a Thwaites pub, it is now a free house, with eight beers on the bar, including their own Moorbrook Pale Ale brewed by Blackjack, Durham Lemon Dib Dab, Potbelly Streaky and Raw Black Forest Stout. This did seem a somewhat ambitious range for such a small pub, but all those we had were in decent enough nick. My sole previous visit here had been on Saturday 27 November 1993, when I memorably watched England beat New Zealand at Rugby Union, and also visited two of its now-closed neighbours.

Heading back down Moor Lane towards the city centre, past further closed pubs, we turned off the right along Adelphi Street to reach the Vinyl Tap. Formerly the Hearts of Oak, this street-corner pub has now been reopened and revived with a vinyl record theme. There were two large racks of vinyl albums for people to pick out, although it wasn’t entirely clear to the casual visitor how the request system worked. We were treated to Hot Fuss by The Killers which, let’s face it, wasn’t exactly Jethro Tull. 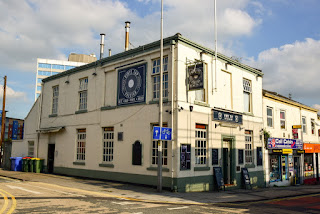 The pub has a spacious single-room interior, albeit with something of a lack of seating, although we were able to find a berth at a long table in the centre. There were five beers available including their own Vinyl Tap Pale, Duffield Amber, Waen Eek-a-Mousse Stout (a musical reference there, folks) and Abbeydale Reaper. 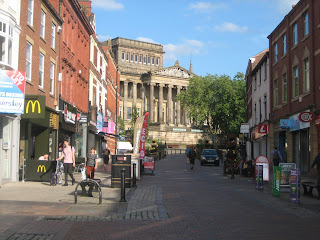 We then followed Friargate back towards the city centre. This is a long street that, despite closures, still has plenty of pubs, including the Old Black Bull, once the city’s premier specialist beer pub, but now apparently fallen on hard times in the hands of Greene King, and the Sun, where Paul Mudge was staying. This is the last remaining Thwaites pub in the city centre, and we had considered including it on the itinerary for that reason, but he reported that they actually had no Thwaites beers on the bar. The top end of Friargate is closed off by an impressive vista of the Victorian Harris Museum which many people might imagine was the town hall.

Deliberately putting off the best until last, we diverted off Friargate along Orchard Street to reach the Market Tap, which not surprisingly faces the Victorian covered market halls. This pub seems to be undergoing an identity crisis, as it has been fashionably renamed “Tap”, but still plainly says “Market Tavern” on the frontage, as the photo shows. I suspect even that is relatively modern, and going back forty or fifty years it might well have been the Market Hotel or Vaults. 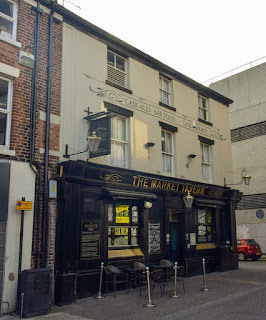 It has an L-shaped single-room interior around the central bar, with plenty of bench seating and couple of intimate but rather dark booths on the right. A notable feature is a glass panel on the floor just inside the door allowing you to see down into the cellar. There were four beers on the bar – John Smith’s Cask, Hawkshead Bitter, Titanic Plum Porter and Beartown Bluebeary. Compared with one or two of the earlier pubs, it was good to see some familiar pumpclips, and the John Smith’s, while it might be a beer that some look down on, was in fact very good indeed. Jessie’s Girl by Rick Springfield on the soundtrack brought back some memories of the 1981. Maybe, or maybe not, by coincidence, that particular day happened to be Rick Springfield’s 70th birthday.

Doubling back down Orchard Street took us to our final call and the crème de la crème of Preston pubs, Robinson’s Black Horse. This is an impressive late-Victorian redbrick street-corner pub that merits a full entry on CAMRA’s National Inventory of Historic Pub Interiors. There are a couple of cosy front smoke rooms on either side of a mosaic-floored corridor leading to an amazing ceramic bar counter in what was originally the public bar. At the rear is a comfortable recessed seating area with mirrored walls, with the entrances to the Ladies’ and Gents’ toilets on either side. 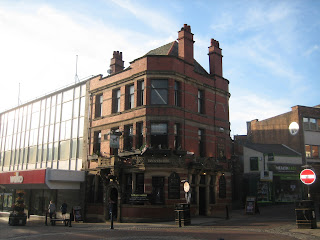 There seemed to be something of a Hop Back tap takeover, with Citra, Entire and Fuggle Stone, but in a pub such as this it would be rude not to drink the Robinson’s, which was available in the shape of Unicorn and Dizzy Blonde in both standard and chilled version. The Unicorn was excellent and for me was the best beer of the day. We discussed what was the point of chilled cask beer when the actual serving temperature achieved was so variable anyway. Wouldn’t it be redundant if the target cellar-cool temperature was reliably achieved?

From here it was a brisk ten-minute walk back to the station for those of us not living locally or staying overnight. As always, a great day out with good beer, good – and varied – pubs and good company. Sheffield Hatter had worked out that the planned itinerary covered 4.2 miles, and with the fruitless short cut to get to the Continental it must have been more like four and a half. Who says beer drinking doesn’t keep you fit?

Thanks to Peter Allen of Pubs Then And Now for the photos of the Guild Ale House, Vinyl Tap and Market Tap/Tavern.

Posted by Curmudgeon at 8:03 am