Whither the village pub? 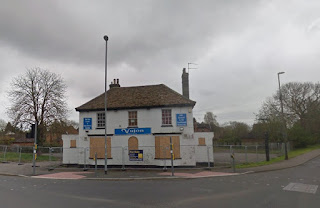 On my recent visit to Cambridge, I happened to be driving through the village of Harston, to the south-west of the city, and spotted a closed Indian restaurant prominently situated in the fork of two roads. It looked like an obvious former pub, and after a certain amount of digging I found out that it was originally called the Old English Gentleman. Clearly a shoo-in for my Closed Pubs blog.

However, my investigations also revealed that there were two other closed pubs in the village, the Pemberton Arms and the Three Horseshoes, leaving just the Queen’s Head still standing, plus a keg-only brewery tap on an outlying industrial estate that is only open for ten hours a week. This is a familiar story from villages up and down the country.

Yet Harston is situated in area where there’s a lot of new housing development going on nearby. Surely that should provide new custom for its pubs. After all, it’s often said that being close to a good local pub is often a major factor in housebuying decisions – for example, this report states that a quarter of homebuyers see it as important. However, this seems to be yet another example of revealed preference, where what people say to pollsters isn’t borne out by what they actually do on the ground. There’s very little evidence that building new housing in practice does much to help village pubs. It’s a demonstration of the “chimneypots fallacy” that nearby housing is a guarantee of trade.

Take the large village or small town of Holmes Chapel, right in the heart of Cheshire. The 2011 census gave it a population of 5,605, but that has since been substantially boosted by major housing developments on three sides. It once had four pubs, one of which, the Good Companions, closed a number of years ago. Of the three remaining, Sam Smith’s Swan, just over the railway line from a big new estate, is currently closed, leaving just two, plus a new craft bar/micropub. Despite a large influx of new residents, it doesn’t seem to be boom time for pubs in Holmes Chapel. Maybe the archetypal village local isn’t what new house buyers are looking for.

Planning permission has now been granted for the former Old English Gentleman to be turned into a convenience store. Clearly that will be of more benefit to the local community than a closed Indian restaurant. And, while we may bemoan the loss of pubs to retail use, it has to be remembered that all pubs are not equal. While some can genuinely say they are the heart of their village, others adopt a trading format that delivers very little to local residents, something with which my recent Twitter poll agreed:

POLL: Which is more useful as a community facility in a rural village?