Only here for the pub? 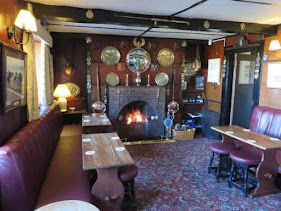 I was recently reading a blogpost by Martin Taylor about the Hyde Park in St Neot’s, Huntingdonshire, and saw this comment that very much struck a chord with me.

25 years of trendy beers in “CAMRA” pubs and I suddenly find I prefer slumming it in scruffy market town boozers selling Doom Bar after seeing the joy in LAF’s posts.

“LAF” is Life After Football, who tends to write about pubs used by ordinary people that are never going to trouble the scorers for the Good Beer Guide.

This mirrors what I wrote ten years ago:

At heart I have to conclude I’m more fascinated by pubs than beer – by the variation in layout and architecture, the fittings from many different eras, the ebb and flow of trade, the little rituals and quirks of pub life, the mix of customers, their interaction with the bar staff and each other, the way their clientele and atmosphere reflect the varied strands of society. Every pub is different and has its own character and its own story to tell.

I first became interested in beer in the late 1970s, when the landscape was very different from today. There was effectively a finite number of draught beers available from a slowly diminishing number of long-established breweries. Although a few beers enjoyed wide distribution, in general to sample a variety of brews you would need to travel to different parts of the country and drink them in the tied houses of their own brewers, which of course added to the thrill of the chase. If you wanted to try Mitchells or Yates & Jackson, you would have to go to Lancaster or its environs.

Pubs as such were largely taken for granted, although it quickly became clear that they varied widely, with some being characterful and welcoming while others were blandly modern or offputtingly gimmicky. Sometimes you found yourself visiting a dreadful pub for that occasional rare beer, but in fact that was surprisingly rare. Some pubs were fascinatingly old and quaint, and some were wrecked by heavy-handed renovations, but nobody had yet seen the need for a National Inventory of historic interiors.

Before moving to the Stockport area in 1985, I never lived anywhere there was a wide choice of beers available on my doorstep. Therefore in each area, for your local pubgoing, you had to learn through trial and error (sometimes aided by the Good Beer Guide) to distinguish between the pubs available to you, both in terms of their atmosphere and the quality of their beer. It became evident that, broadly speaking, there was a correlation between the two, that better pubs kept their beer better.

However, slowly but surely, a fundamental change came about in the nature of beer enthusiasm, in that it became self-referential. Rather than taking an interest in something that existed anyway regardless of their presence, the market began to change to accommodate their desires, both in terms of the beers brewed and the venues in which they are sold. It is hard to think of any other field that attracts an enthusiast following where this has happened to anything like the same degree.

The first manifestation of this was the rise of the beer exhibition pub. Initially these were only showcasing beers not normally available in their local area, but they were specific venues targeted at beer enthusiasts, which took them out of the more mainstream pubs. This was followed by the steady rise of microbreweries, some of whom produced brilliant and eye-opening beer, but others came up with samey product that sometimes verged on dishwater. But it provided a lot more beers to sample, and gave rise to the phenomenon of the beer ticker. At the time they were derided by mainstream CAMRA members, but it seems that nowadays everyone has become a ticker.

Out of the microbrewery scene came the trend towards extremely pale and hoppy beers, and then in the current century the bewildering variety of flavours and styles, often at extreme strength, under the banner of craft beer. It all becomes impossible to keep up with and you find yourself wondering what is the point.

Some may respond by saying “life is very dull if you never try anything new”, but that is really a straw man. I’m certainly not resistant to trying new things, especially if they are new permanent beers from established brewers that I am likely to encounter on multiple occasions such as, a few years ago, Timothy Taylor’s Knowle Spring. But if it’s a case of something so odd or immensely strong that I’ll just say “Well, that as all very well, but I’m not going to make a habit of it”, then it seems a futile exercise, and to see the pursuit of novelty as the prime purpose of going to the pub is completely at odds with the reason the vast majority of people do it. The idea of spending a whole day in one town drinking Bass and Pedigree is anathema, let alone the prospect of an afternoon in an estate pub on Carling.

On the other hand, I’m certainly not averse to visiting unfamiliar pubs. During 2019, I went to 111 new pubs, which is good going considering that I’ve already had 40-odd years to work at it. Of course some are far better than others, but every pub visit has something of interest. It’s an endlessly rewarding quest. And even the familiar pubs that you have been to many times before have something different every time you go. So far this year, unfortunately, due to the fifteen-week closure, cancellation of holidays and continuing social distancing and travel restrictions, I’ve only managed ten, half of which were on one trip to Burton-on-Trent in March.

As I said in the post from 2010, locally I often choose to drink in Sam Smith’s pubs, not because I particularly value their beer above others available in the area, but because I appreciate what they offer in pub terms – comfortable seating, an absence of TV sport and piped music, a general lack of noisy children and, while some do sell food, never being put in a position of being the lone drinker in a wall-to-wall sea of diners. Plus all of the customers are there for what the pub has to offer rather than specifically being beer enthusiasts. While I prefer cask ale to keg, if these pubs dropped the cask I’d probably still go there for the same reasons, albeit perhaps a little less frequently. Fortunately, while they have converted a number of pubs to keg, that’s not a choice I’m forced to make in my local ones.

To many self-proclaimed beer enthusiasts nowadays, life is a constant quest for the new and unusual, and the greater the strength and the weirder the flavour the better. There’s nothing wrong with that, of course, if that’s what takes your fancy, but it drives a wedge between them and the general population of pubgoers that certainly didn’t exist in the 1970s, and makes them ill-placed to represent the wider interests of pub operators and customers.