Soaking up the virus On Monday, the government set out a system of tiers of lockdown restrictions to standardise the various local rules in place across England. Licensees in Greater Manchester breathed a sigh of relief that pubs in the area were not to be closed, as had been widely feared. However, further down the Mersey, the “Liverpool City Region”, which includes Halton unitary authority as well as the former county of Merseyside, became the only area of the country to be placed into Tier 3, the highest tier.

Somewhat to many people’s surprise, this does not require the complete closure of pubs, but allows them to stay open and serve alcoholic drinks so long as every customer consumes a “substantial meal”. On the face of it, this seems to represent unfair and arbitrary discrimination against wet-led pubs, many of which have bent over backwards to comply with the ever-changing restrictions. It also reflects a long-standing official prejudice against drinking in pubs as such, and seems to assume that, without a filling meal, they all become scenes of riotous debauchery.

However, without justifying it for a minute, I think the decision was arrived at from the opposite direction. To close all restaurants, as applied throughout April, May and June, would effectively prevent anyone having a sit-down meal outside their own home and would represent a massive restriction on economic activity. However, if table-service restaurants are allowed to remain open, then it would be grossly inconsistent to require food-serving pubs to close, especially given that many are effectively restaurants in functional terms anyway. Yes, it is unfair to wet-led pubs, but to close all pubs while keeping restaurants open would be unfair to food-led pubs.

A rule such as this, though, clearly requires definition. It wouldn’t be seen as acceptable for a packet of scratchings to legitimise a lengthy drinking session. In Ireland it was defined as a food item costing a minimum of €9, which is £8 at the current exchange rate, although more like £6 at purchasing power parity. This, however, is a very arbitrary rule given the wide variations in food prices between different pubs. In some high-end gastropubs, it wouldn’t even buy you a starter, whereas the £3.95 meals spotted by Martin Taylor in the Colliers’ Arms at Cheslyn Hay in Staffordshire, shown below, look pretty substantial to me. 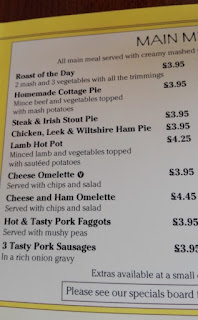 Ireland also had a maximum visit duration of 90 minutes to prevent a meal turning into a lengthy drinking session. Frankly I’ve been in restaurants in this country where you would struggle to get your meal ordered, eaten and paid for within that time-frame.

If you are not going to have an objective yardstick such as price, then you will need to resort to a more subjective definition. Government minister Robert Jenrick* tied himself up in knots by saying that a Cornish pasty on its own wasn’t a substantial meal, but put it on a plate and add chips or salad and it magically becomes one. Few would dispute that a burger and chips would qualify, and the health-conscious should surely be allowed to substitute a salad for the chips. If a burger, then surely also a steak ciabatta, which is in principle the same kind of thing. And a cheese or hummus one for the vegetarians. Before too long, you have a cheese toastie with a couple of lettuce leaves qualifying.

Some might dismiss this as nit-picking, as you know a substantial meal when you see one. In the majority of cases, this is true, but if any regulation is to be enforced by law then it requires a watertight definition. We will see how this evolves over the next few days. But I would imagine under these rules, however interpreted, that most food-led pubs, including Wetherspoon’s, will consider it worth their while remaining open.

* When contesting the Newark by-election in 2014, Jenrick was nicknamed “Robert Generic” as he seemed to perfectly fit the stereotype of the identikit, principle-free, careerist politician. And he succeeded in rising without trace to become a member of the Cabinet in just five years.