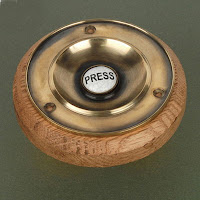 My local pub was built in 1939 and its fabric remains little altered since then. Around the walls of the lounge are a series of little push-buttons that once were used to summon waiter service. They have not been operational since I first started going in there 35 years ago, but show that this is something once commonplace in pubs. It had pretty much entirely died out by the time I started drinking, although I believe it lingered on into the 1980s in a few pubs. Presumably, increasing labour costs were the reasons for phasing it out. To some extent, the provision of waiter service justified the charging of higher prices in the lounge, something else that has pretty much entirely disappeared.

Since the middle of September, all pubs in England have been required to operate table service for drinks. I’ve mentioned on several occasions how this is proving problematic, but I thought it was worth its own post to explain why it just doesn’t work.

Of course table service is the norm in restaurants, but there is a significant difference there in that the customer experience follows a predictable pattern. They come in, are given a menu, place their order, are served with starter, then main course, then are given the opportunity to order a dessert and coffee, and eventually are presented with a bill which they proceed to pay. As long as the staff keep an eye on where diners are up to, it shouldn’t be too difficult to move them smoothly on from one stage to the next. It should be a touchstone of good service that the customer is always approached before they actually feel the need to summon a waiter.

Despite this, over the years I’ve had numerous experiences of utterly execrable service in restaurants and dining pubs, either forgetting the order entirely or being totally ignored once a particular stage had been completed. This cannot be blamed on simply being busy, as often it has happened when the place is virtually empty. If I had infinite reserves of both time and patience, I’m sure I could have qualified for quite a few free or discounted meals – indeed I have received one or two.

The main responsibility must lie with the restaurants themselves, in failing to recruit, train and motivate their staff properly. However, it has to be said that some of the staff come across as lackadaisical and unobservant. I’ve never worked as a waiter, and to be honest wouldn’t be cut out for it, but I’m sure I would understand the basic requirements of the job, especially keeping an eye on where the various tables you are looking after are up to.

However, the situation for drinks service is very different, in that the predictability is lost. The waiter does not know how long a group will be staying, how fast they will be drinking, or when they will want refills. Hence they are much more likely to need to call for service, which is why pubs used to be fitted with service bells. To be reliant on hailing a passing waiter introduces an element of stress and uncertainty into the simple process of getting another drink.

This isn’t, at present, the pubs’ fault, as they have been placed against their wishes in a very difficult situation at the same time as being put against the wall financially. In a small pub where all the seats can be viewed from the bar, it may not cause too much of a problem, especially considering the reduced customer numbers. However, in a large venue, with various nooks and crannies and remote areas, being able to summon service could become quite a challenge. My limited experience of using table service in Wetherspoon’s without using the app suggests that ordering a second drink can be something of a hopeless quest. One solution would be to actually ring the pub up on their public number, but that might not go down too well! If the only way to obtain service is to accost a passing member of staff who is in the middle of doing something else, then the system has failed.

Using an app for ordering alleviates this problem to some extent but, as I have discussed, it creates issues of social and digital exclusion, and still does not deal with the question of how to summon staff if you don’t actually want to order anything, such as my problem with a cloudy pint.

It appears that the current restrictions are going to be with us for some time, and so pubs, assuming they are allowed to remain open at all, will no doubt learn and adapt to cope with the situation better. But there is no getting away from the fact that table service is much more labour-intensive than bar service, and this is only covered up at present by the limits on customer numbers. If revenues have been slashed, pubs are in no position to pay for the extra staff they need.

It’s often said that bar work should be valued more highly, but the only way to reflect that value is to charge higher prices. In Continental countries where table service is the norm, bar prices for alcoholic drinks are often markedly higher than in this country despite the lower rates of alcohol duty that apply. It is a completely different model of operation that British pubs are ill-placed to adapt to in the middle of an existential crisis. As Glynn Davis says in this article:

I’d argue they are very much geared up to this in terms of service and also their customers are used to this method of operation. Also the economic model has been built around it. At my local pub, sales levels had rather healthily increased by 50% quickly after lock-down but I understand staff numbers had doubled in order to deal with the extra effort of table service. This suggests a lot more work for the same levels of profitability.

And, for drinks service, unless your venue is absolutely teeming with staff, it is going to require one or both of a modern equivalent of a service bell, or some other means of calling someone to your table.
Posted by Curmudgeon at 7:52 am