Supping with a long spoon 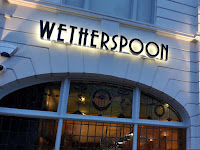 Last Sunday I tweeted the following from one of my local Wetherspoon’s, which was met with a surprisingly vituperative response.

Just encountered the inevitable pitfall of ordering guest ales in Spoons via the app, when there is no bar service. What do you do if you get a cloudy pint? ☁️🤔

The most frequent charge was “Why aren’t you in a proper pub?” But my explanation for that was pretty clear.

I’d be interested in your recommendations for anywhere nearby with a food offer of remotely comparable range and value. I don’t go to Spoons for the atmosphere.

I’m certainly not an unequivocal Spoons fanboy, and over the years I’ve often criticised their venues’ lack of atmosphere and deliberately unpubby layout. But it can’t be denied that they’re a very successful company who have seized opportunities that were available, but which others didn’t take. They attract people into pubs who otherwise probably wouldn’t be there at all, and Spoons often has a wider social mix of customers than anywhere else.

In many places such as smaller non-tourist towns or city suburbs, they can offer by far the best (or even the only halfway decent) selection of food and drink. In an urban area on a Sunday, there may well be nowhere else to eat in a pub apart from a family dining outlet, or a gastropub with its inevitable high prices and snobby atmosphere. The idea that there’s a whole stratum of independent places serving quality, locally-produced lunchtime pub food at reasonable prices is pie in the sky.

If I just wanted a drink, then I certainly wouldn’t be in Spoons. But there are only three proper pubs in my particular corner of Stockport, and all of those have piped music and TV football which, to their credit, Spoons don’t. We might benefit from a Sam’s pub, although there are a couple in the town centre and another just over the Manchester border.

The question was also asked “why are you using the app?” Now, I’m certainly no great fan of either apps or cashless payments, but I’m not a total technological Luddite. I’ve got it on my phone and often use it to order food in Spoons because it makes the process quicker and easier and means there’s no risk of someone else nicking my table while I’m up at the bar. Mandatory table service also seems to have made them grasp the nettle of getting their current guest ales reliably listed. Plus, from my experience of using table service and paying cash in another branch earlier in the week, it would take an age to actually place my order.

The issue with the cloudy pint exposes another drawback of app ordering – what do you do if you want to summon a member of staff but not actually order anything? Fortunately in this case the beer arrived before the food, so I was able to send it back when the food appeared, but if they had come at the same time I would have been waiting for an indefinite length of time to accost a passing server and had nothing to wash my meal down with. Perhaps I could have marched angrily up to the bar, but you’re not supposed to do that, are you?

Maybe they’re hoping that when this area gets moved into Tier 3 that a pint of soupy beer will qualify as a “substantial meal”.