Yesterday, Boris Johnson announced a new national lockdown lasting four weeks until the end of November. Not surprisingly, as before, hospitality bore the brunt of the restrictions, with pubs, restaurants, cafés and coffee shops unable to serve customers on the premises in any way. This is despite official government figures showing the hospitality sector as responsible for an utterly trivial source of infections outside the home – a mere 2% according to the chart below. 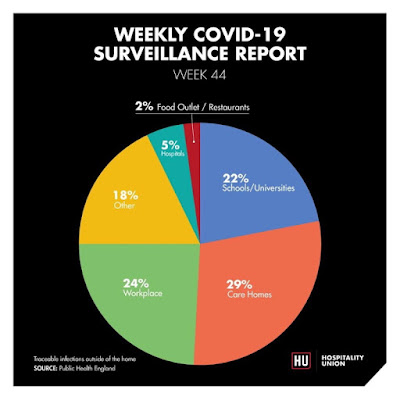 Given this, it is hard to see that this particular part of the restrictions will have any significant effect in curbing the number of cases. It seems that, yet again, hospitality is being unfairly scapegoated as it forms an easy target. Indeed, the whole package comes across as an ill-considered example of the “Something Must be Done!” school of policymaking.

To add insult to injury, looking at the small print of the regulations reveals that licensed premises are even going to be banned from selling alcoholic drinks for takeaway. For plenty of pubs this was a lifeline during the first lockdown and allowed drinkers to continue enjoying cask ale. To prohibit it now seems completely unreasonable given that supermarkets and specialist off-licences can continue selling alcohol. You have to wonder whether the anti-drink lobby have managed to sneak it in under the radar.

However, it has not gone unnoticed by industry groups such as UK Hospitality and SIBA, and hopefully pressure can be brought to bear to get this reversed before the lockdown comes into effect next Thursday. Johnson said that this lockdown wasn’t like the first one, but on this evidence it seems to be even stricter!