Still deep in the Covid crisis, and with the end of the Brexit transition period fast approaching, you might imagine that the government had its hands pretty full. But they have still found time to launch a consultation on a total ban on Internet advertising of so-called “HFSS” (High in Fat, Salt or Sugar) food products.

The ostensible aim is to combat childhood obesity, but it seems to stem from the “something must be done” school of policymaking. The thought process seems to be that, if children spend a lot of time on the Internet, banning advertising there will reduce their exposure to it and thus their consumption of such foods. However, the government’s own estimates assume that average calorie consumption will be reduced by a mere 2.8 calories a day, and that itself is an increase from an initial estimate of just 0.3 calories. It is also very poorly targeted, with many items included that have little or no appeal to children. How many, for example, go out shopping for cooking sauces?

As I reported last year, the definition of HFSS foods includes many items that are generally perceived as wholesome and natural, such as orange juice, butter, full-fat cheese and milk, and many meat products including bacon. The lazy assumption is that it just applies to crisps and burgers, but many companies who perceive themselves as being in the health food market are taken aback to find themselves in the fiiring line too. Small artisanal producers are affected just as much as the big boys, and may indeed find the impact even more severe.

As Christopher Snowdon points out, the proposed scope of the restrictions is quite breathtaking. Not only does it include anything with added sugar, such as biscuits, jams, ice cream and yoghurts, but also a long list of savoury items as shown in the graphic below. 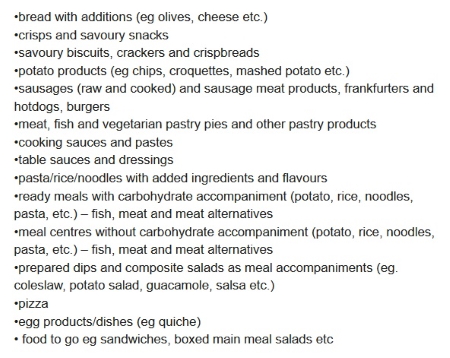 It’s hard to think of many food items involving any processing whatsoever that will be excluded. These aren’t just a small subset of particularly harmful products, but a huge swathe of what most ordinary people actually eat and enjoy as part of their normal everyday diets.

The Internet is no longer just a fancy little add-on for companies, but the principal channel of advertising and promotion. Deprived of that, it is much harder to do business. As I have pointed out before in the context of tobacco and alcohol, advertising bans have little effect on underlying demand, but what they do do is to ossify the market. It becomes difficult or impossible to launch new products, let alone for entirely new competitors to enter. This will especially affect small start-up companies wishing to challenge the dominance of existing players. It will be a kick in the teeth for thousands of small businesses. It seems redundant to express surprise at such a policy being floated by a Conservative government when they have spent most of the past year being just as authoritarian and anti-business as anyone else.

The government have been generous enough to still permit factual listings of product details on company websites, so it won’t stop online sales, either direct or through supermarkets, or takeaway ordering. But will it even be acceptable to show a photo of the product concerned? And you certainly won’t be permitted to advertise the fact that you offer these products anywhere else. How, for example, will a wedding cake maker be able to inform anyone that they provide that particular service?

The government spends a lot of time promoting distinctive British food products around the world, but it would be ironic if they were extolling the virtues of Lancashire hotpot, Wensleydale cheese and Melton Mowbray pork pies while at the same time preventing them from being advertised in their country of origin. And, if you imagine that none of this is going to be applied to alcohol over the next few years, then I have a bridge to sell you.