Going back a couple of months to October, although it seems much longer ago, many people in the North were aggrieved that they seemed to be being singled out for much harsher treatment than the South in terms of Covid restrictions. Even two weeks ago when the second lockdown ended, London seemed to have been excluded from Tier 3 restrictions on very flimsy evidence.

This week, though, the boot was on the other foot, with London and large swathes of the South-East being plunged into Tier 3 at very short notice. However, tempting as it might be, it would be wrong to engage in Schadenfreude over this. “I’ve been stuffed, therefore you should be too” is not really going to help anyone.

Indeed this kind of dog-in-the-manger attitude has been a feature of the whole Covid crisis, with too many people apparently far keener to wish misery on others rather than protesting about their own predicament. A prime example of this is people in hospitality complaining about shops not being required to operate track and trace, something that would be completely inappropriate and impractical.

What is particularly infuriating about the latest round of restrictions is that the rise in infections clearly cannot be laid at the door or hospitality, as the sector was entirely closed during the lockdown that ended less than two weeks earlier. Yet closing or opening hospitality is the main difference between Tiers 2 and 3. It seems that, yet again, it is being used as a sacrificial lamb. The government’s approach is that of a one-club golfer and, what is more, a club that doesn’t even succeed in hitting the ball.

It is also completely unreasonable to impose closures on businesses with a mere twenty-four hours’ notice. This might be justifiable as a one-off action in a dire emergency, as was arguably the case back in March, but it is no way to treat business on an ongoing basis. Just think of all the food and drink that had been bought in for the busiest trading week of the year, and will now end up being thrown away.

It seems that people in government severely overestimate the extent to which lockdowns actually succeed in influencing the spread of infection. A seventeen-day “circuit-breaker” was imposed in Wales a couple of months ago, which was held out as an example that England should have followed. Yet Wales currently has the highest growth in cases in the whole of the UK, and is heading back into a fresh lockdown of indeterminate length immediately after Christmas. As Einstein is reputed to have said, but probably didn’t, “Insanity is doing the same thing over and over again and expecting a different result.” 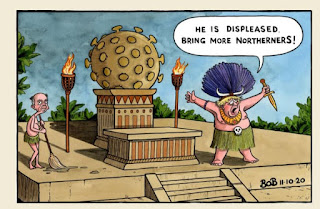 On one level, the cartoon by Bob Moran above is pointing the finger at the willingness to impose restrictions on areas that are physically and culturally remote from the seat of government. But it is also highlighting the pre-Enlightenment view that Covid is a threat that has to be propitiated by human sacrifice.