Top of the heap 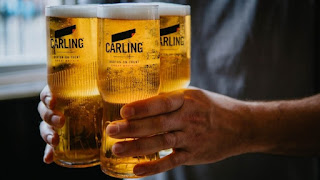 While writing my post last week about Stella Artois, I did a little research to find out where it stood in the league table of British beer sales. This came up with this very interesting report from the Morning Advertiser on the top selling drinks brands in 2019. 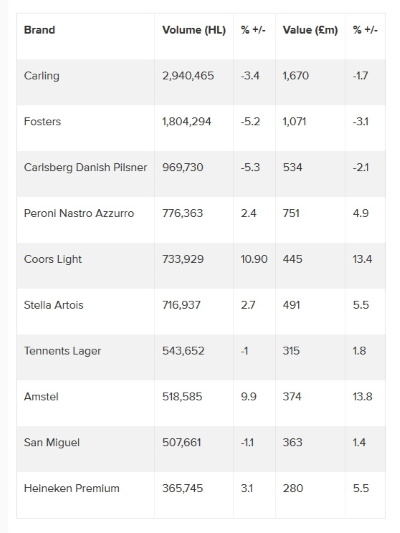 Stella is still well up there in the lager category, selling 717,000 hl in the year (equivalent to 437,000 barrels). But I’m sure I’ve read in the past that it was considerably closer to Carling, the market leader. It is now outsold by Peroni, which in many ways follows the “reassuringly expensive” model of Stella in the 1980s. It is sold at a premium price, at 5.1% it is that little bit stronger than the competition, and it isn’t sold on draught in Spoons or in slabs in Tesco. Look how the sales value of Peroni compares with that of Stella.

Carling, with sales of 2,940 million HL ( (1.793 million barrels) remains the market leader * by a wide margin, and accounts for one in fifteen of all pints sold in Britain. For it to be so consistently successful, it must be doing something right. 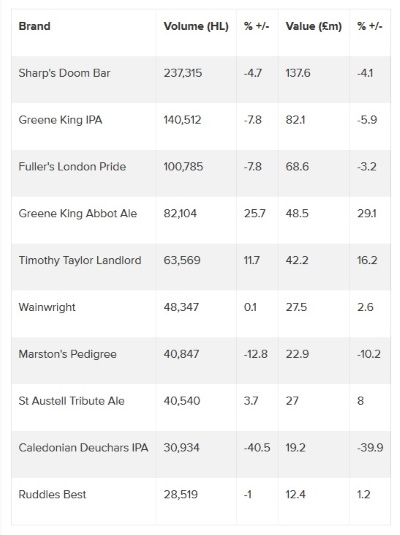 Moving into the cask category, the best-seller, Doom Bar, accounts for 237,000 hl, or only 8% of the volume of Carling. This somewhat exaggerates the market dominance of lager over cask, as cask has much more of a long tail of smaller brands that still do a worthwhile volume, but overall it’s still a 1:5 ratio. It’s interesting that, despite all the talk of the rise of pale beers, eight out of the ten best-sellers are traditional brown beers, and the two pales are ones that aren’t aggressively hoppy.

Of course, getting the distribution is a key factor here, and it’s well-known that Doom Bar gets into many pubs on the coat-tails of Carling. However, it’s patronising to suggest that people will drink any old swill that’s put in front of them, and the history of the British beer market is littered with examples of products that have fallen flat on their faces despite extensive launch publicity and distribution. Taylor’s Landlord has got into the Top Ten despite being a product of an independent family brewer, although sadly it is far too often sold too green and hasn’t had the chance for its distinctive flavour to develop properly.

The article makes no mention of keg ales and stouts, so we don’t know how Draught Guinness and John Smith’s Extra Smooth compare.

The figures also reveal of couple of interesting snippets about two sectors that receive far more attention than their market share merits. The biggest selling “craft” beer, BrewDog Punk IPA, only manages 66,000 hl, or 2.2% of the volume of Carling. And, apart from BrewDog, all of the top ten craft beers are owned by major brewers or firms they have heavily invested in. So much for the “craft beer revolution”.

And, looking at alcohol-free beers, the best-seller, Becks Blue, manages a mere 20,500 hl, or 0.7% of the annual sales of Carling. Yes, there is a place for alcohol-free beers, but all those predictions that it was going to account for 10% of the market within a few years look very misplaced. And, apart from Heineken 0.0%, nothing else manages more than 3,000 hl, which is about the output of a typical railway arch brewer.

* This prompted me to ask on Twitter when Carling became the best-selling beer in Britain. Apparently lager overtook ale in market share in 1986, so the consensus is that it was around then, or maybe a year or so earlier. But what did it replace – another lager like Carlsberg or Heineken, or an ale brand such as Double Diamond?