Making a meal of it 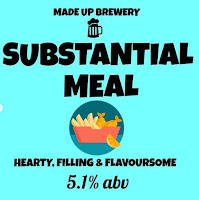 From today, while the pubs remain firmly shut in over 40% of England, including my local area, in just over half the country they will be allowed to reopen under “Tier 2” provided that they serve all customers with “substantial meals”. This obviously raises a question of definition, as I discussed here, and government ministers have been tying themselves up in knots over whether Cornish pasties and Scotch eggs qualify. It’s easy to say “you know one when you see one”, but if pubs run the risk of substantial fines for non-compliance, it’s important that they know exactly where they stand.

For what it’s worth, in the couple of weeks at the end of October when this rule applied in Greater Manchester under the then “Tier 3”, Wetherspoon’s were happy to continue serving ciabattas without any accompaniment of chips or salad, although to be fair they are quite substantial. They come within the “includes a drink” meal deals, so if you choose one of the more expensive drink options such as premium draught or bottled lagers, the effective cost of the food is reduced to little more than a quid.

Given this, inevitably some pubs within Tier 2 that do not normally serve meals will be considering whether it’s worth putting on some kind of food offer to allow them to open. However, it’s important to think this through properly. They need to remember, which may not be immediately obvious, that it’s not enough simply to make the food available; every single customer will need to order and eat a meal. While it is permissible to contract for meals to be provided by an external caterer, they still need to be ordered and paid for through the pub: it isn’t sufficient just to put a kebab van on the car park.

It they aren’t already, pubs will need to register with their local authority as a food business. And they will need to be very careful to ensure that their food offer is genuine, and not something simply provided as a front to allow customers to drink. Any thoughts of just handing around a few stale sandwiches that are then passed on to the next customer – as once occurred under some strange Scottish regulations in the past – need to be put aside. Inevitably, the occasional customer will order a meal and then not fancy eating it, but if nobody is eating it appears suspicious, and the licensing authorities are likely to take a very dim view.

If you run a wet-only pub, by definition your customers are not coming in for meals, so to expect every visitor to eat is a massive change in behaviour. People might be happy to do it one night a week, but they’re unlikely to want to do so on a regular basis even if they really like the pub. And there will be little attraction to the person who just drops in for a pint or two, possibly before or after eating at home. Therefore, while it may well be legally possible to reopen, requiring every customer to eat a meal may not attract much business or make financial sense. I would expect that, in practice, very few previously wet-only pubs will take advantage of the “substantial meal” rule to reopen in Tier 2.

Clearly any dining pub that previously did the vast majority of its business from serving meals anyway will be able to reopen and see little reduction in trade, and they also won’t find the table service requirement too much of a problem. And every Wetherspoon’s in Tier 2 areas will certainly open. But many other pubs that do a mixture of drink and food trade may well look at the numbers and decide it isn’t worth it. I know a couple near me that offer extensive menus, but also attract a lot of local drinkers in the evenings, decided not to open under the old pre-lockdown Tier 3, and I read yesterday that a popular village pub in Cheshire that does attract a significant destination food trade had concluded it wouldn’t be worth it either.

It’s very difficult to avoid the conclusion, as argued in this article, that the decision to allow people to eat meals in pubs, but not to just go for a drink, is motivated a strong element of snobbery as opposed to any kind of rational analysis.

Public schoolboys, middle-class professionals and most university academics will never understand on a personal level the critical importance of a pub to the community. They drink expensive wine at home and would never think to step inside a regular hostelry unless it had re-invented itself as some kind of ‘gastro pub’, complete with chef and pretentious menu...

...This is where the deeply divisive ‘substantial meal’ condition for Tier 2 comes from. It reveals a high degree of snobbery and outright condescension for anyone who might want to drop in to a pub for just a drink. Quite possibly that is because so many ordinary people simply cannot afford a ‘substantial meal’ out on a regular basis. But they are, like myself on occasion, often quite desperate for some friendly company in comfortable surroundings.

Posted by Curmudgeon at 7:49 am