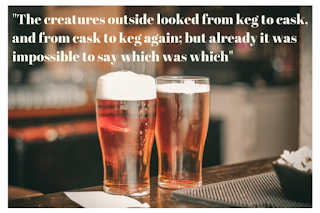 This year sees CAMRA’s 50th anniversary, and many people have been keen to project their own present-day agenda back on to the reasons for the organisation’s formation. One comment you often see is “of course, the keg beers back then were nothing like those we have now”.

In some respects, this is of course true. There were no nitrokeg beers around then, for a start. And there is a much wider variety of draught beers produced overall, many of which are low-volume niche products that would never be able to sell in cask form. But it shouldn’t be imagined that, back in 1971, there was a clear dichotomy between fizzy, heavily-processed Double Diamond and Red Barrel, and wholesome, natural Boddington’s and Brakspear’s.

Much of the beer that CAMRA was objecting to wasn’t even keg as such, anyway. In the North of England, many breweries produced tank beer which was only rough-filtered and often unpasteurised. It was pumped to the bar, not pressure-dispensed. And, in the South, many offered top pressure beer, which involved attaching a CO2 cylinder to a cask to push the beer to the bar rather than using a handpump. In some ways this was analogous to the present day “keg-conditioned beer”.

But, while the starting point of top pressure was real ale, CAMRA refused to regard this beer as acceptable. The Good Beer Guides of the 1970s record with a certain amount of regret against breweries whose real ales were well-regarded, “Only 12 of the 24 tied houses sell real ale” (Harveys) or “140 tied houses, many of them offering only pressurised beer” (Morrells).

It must be remembered that, while the concept of “traditional draught beer” was broadly understood, the specific definition of real ale was something that was devised by CAMRA to identify that in British beer that it was trying to preserve, against that which it regarded as a negative trend. It was always something of an arbitrary division into sheep and goats, but it had the advantage of being clear-cut, and rapidly became something that resonated with the drinking public. If CAMRA had attempted to say “well, this Harvey’s top pressure beer is actually not bad, whereas this Whitbread West Country Pale Ale, while technically real ale, is actually swill” it would have been putting across a very muddled message.

Over time, the use of the top pressure and tank beer systems withered away, so that by half-way through the lifetime of CAMRA they had pretty much entirely disappeared. There was much less small-scale, artisanal beer available in a non-real format than there had been when the organisation was founded. However, since then the tables have been turned, with the keg format increasingly being adopted by new and innovative craft breweries.

In most cases, this represented either beers that were outside the British tradition, or which were unusual in terms of strength or flavour to the extent that they would be unlikely to achieve the level of turnover needed to be presented as real ale. It was notable how the new wave of keg beers rarely challenged the established leading brands and styles of real ale head-on. But it is certainly not the case now (if indeed it ever was) that no high-quality draught beers are being produced and sold in the UK outside the scope of real ale.

However, despite the advance of these “new wave” keg beers, you’re stil fairly unlikely to encounter them outside specialist pubs. Go in one of those pubs identified on WhatPub by the little red keg symbol indicating “No Real Ale”, and the ale range is likely to consist of one of the well-known smooth bitters along with, if you’re lucky, something like John Smith’s Chestnut Mild. A trend, though, that is becoming increasingly evident is the spread of keg pale ales such as Shipyard and Camden Pale that do not have a direct cask equivalent. You might well find one of those on the bar of an Ember Inn or Stonehouse pub that no longer has cask. And one licensee was telling me recently that a keg pale was drawing customers who wouldn’t even think of touching his cask.

There remains, though, an element of forked tongue about this new-found embrace of keg. It would seem that some keg beers are more equal than others. While it is true that most well-known real ale brands do not have keg equivalents (or, if they do, they are only produced in tiny volumes) there is one well-known bitter that is sufficient to get pubs into the Good Beer Guide where it is the only cask beer. Yet put that beer in keg form, and those pubs would not be given house room, even though the beer is essentially the same. And, pre-Covid, I spotted a pub selling Robinson’s Old Tom in keg form. Given its low volumes and specialist appeal, that might seem a sensible candidate for kegging, but would it really be accepted in the same way as a craft keg imperial stout?

It could be argued that, given the widespread availability of high-quality craft keg beers, CAMRA’s original definition of real ale is no longer relevant in the modern British beer market. However, it does have the great advantage of being an objective standard – some beers are real, and others aren’t. Take that away, and you are left with making subjective judgments on which beers are good based on a whole range of criteria that may be nothing more than personal prejudice, not to mention the likelihood of slipping into outright snobbery directed at popular beers and large-scale producers.

It was always a blinkered approach to believe – as many people once seemed to do – that the definition of real ale could be used as a universal yardstick to separate good from bad beers. But, in the context of the British ale market of the early 70s, while it was a broad brush, it did make a lot of sense, and provided a clarity that a more nuanced explanation never could. And, as far as beers in traditional British styles go, it remains relevant today. I don’t see anyone arguing that beers such as Taylor’s Landlord would be just as good, if not better, if they were kegged.