In the Autumn of 2019 I spent £70 on a three-year Senior Railcard, but I was only able to use it for two trips out, to Shifnal and Burton-on-Trent, before the country was plunged into lockdown in March of last year. Obviously there remained a good amount of time to take advantage of it, but anyone who had bought a one-year card in the first two months of 2020 would have rightly felt aggrieved. Despite this, the administrators of the scheme set their face against giving any refunds.

Finally, once the restrictions on travel and pubgoing had been relaxed, I felt able to make use of it last week to put my toe back in the water with a trip to Chester, nearly seventeen months after my last train journey to Burton. I’m not normally in the habit of doing “what I did on my holidays” posts, but thought this one was worth reporting on as a significant milestone.

Despite only being at the other end of Cheshire, because of the geography of the rail network Chester is surprisingly difficult to reach by train from Stockport. You can get to Liverpool, Shrewsbury or Wolverhampton more quickly and easily. Basically there is a choice of taking the slow train through the middle of the county, stopping as such metropolises as Plumley and Mouldsworth, or doing a longer and more expensive, but quicker, dogleg changing at Crewe.

I chose the latter option. The two-car train bound for Milford Haven was standing room only, although I was able to get a seat as some groups seemed to prefer to stand together. There was a boisterous group occupying the two sets of table seats, who seemed genial enough, but might have been hard work all the way to South Wales, especially once the cans of Thatcher’s Gold had kicked in. It was hard to tell on a crowded train, but I would estimate well below half the passengers were masked.

The line between Crewe and Chester is a vital link in the rail network, but doesn’t seem to tie in with any others in terms of through passenger trains, so its basic service is operated by a shuttle which does the 21 miles in even time, allowing an hourly service to be worked by just one unit. Again this was just two cars, and pretty full, with a notable Orthodox Jewish contingent. The line mostly runs through unremarkable lush pastureland, but halfway along you are treated to the spectacular sight of Beeston Castle on its crag rising up from the surrounding plain, with the more modern Peckforton Castle lurking menacingly in the background. 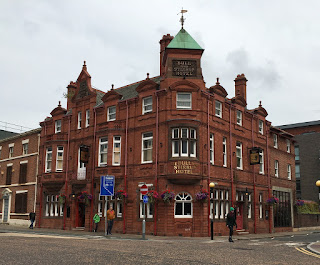 My first call in Chester was a lunch stop at Wetherspoon’s Bull & Stirrup, a handsome redbrick building standing just outside the Northgate. I remember it from the late 70s as a multi-roomed Higson’s pub of great character. However, it was later knocked through by the Boddington Pub Company, so Spoons cannot be held to blame for its current condition. Indeed it had closed before they took it over a few years back. 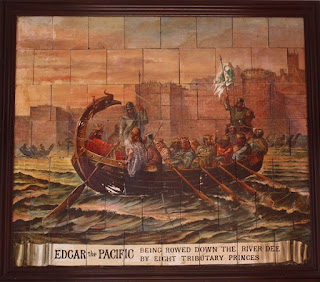 Wetherspoon’s have much extended it at the rear, where the bar now is, but the front section does retain something of a multi-roomed feel, although as usual the absence of bench seating detracts from the overall ambiance. To their credit, they have preserved the tiled mural of Edgar’s Eight, showing eight subsidiary kings from all over the British Isles rowing the 10th-century Anglo-Saxon King Edgar on the River Dee. And, sorry cask purists, but I had a bottle of Tusker with my meal deal.

I then walked down to the Cross along the full length of Northgate Street, which still has six pubs on the right-hand side, although none on the left. I’ve been going to Chester since I was a small child, so I tend to take it for granted to some extent, but it really is a beautiful city, even though I know much of the half-timbering on display is actually Victorian. The city centre was much busier than Stockport, although probably still short of what might be considered “normal” levels, with the absence of foreign tourists obviously a factor. 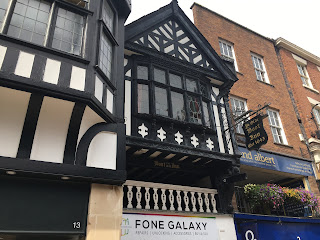 Turning left along Eastgate brought me to Sam Smith’s Olde Boot, which is one of the very few pubs now situated on the historic Rows. I remember from the 1970s when this was a small pub accessed by a passage from the walkway, but it was extended forward to the shop frontages many years ago. It’s a long, dimly-lit space with plenty of dark wood, with the usual Sam’s mature clientele, mostly although by no means entirely male, and was ticking over nicely enough for a Monday afternoon. 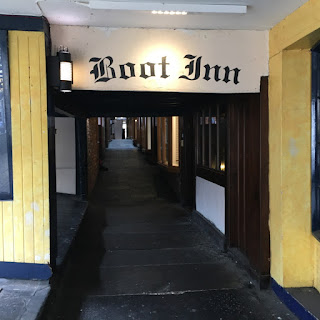 Old Brewery Bitter was on pretty good form, although most of the customers seemed to be going for the Taddy Lager. The landlady was telling a guy standing at the bar how the previous Sunday she had had to throw a party of racegoers out for taking cocaine in the gents’. Many Chester licensees seem to approach race days with dread. 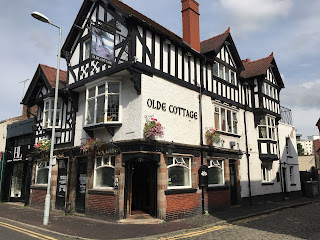 Heading back in the general direction of the station brought me to the Olde Cottage on Brook Street, which is a pub whose fortunes I have been following on Twitter through the cycle of lockdowns. Brook Street, bypassed by a new road in the 1960s, is still on the main pedestrian route from the city centre to the station, and is a busy street with a variety of independent businesses.

Unfortunately I missed the famous pub cat Arty, who was taking his beauty sleep upstairs, but I did get the chance to have a good chat with Trevor, the licensee, who has been in the pub for twenty years. He said that, after two weeks, there were encouraging signs of trade returning to normal, although it was still much less predictable than pre-Covid, with the occasional unexpected quiet night. 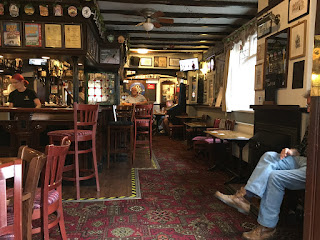 While the pub has a strong contingent of regulars, its location also means it picks up plenty of casual and passing trade. It was certainly reasonably busy for Monday teatime, with a variety of customers popping in and out. The pub belongs to Admiral Taverns, and is allowed to choose one cask beer outside the tie along with three from their own fairly extensive list. On this visit the range was Otter Bitter, Ossett Yorkshire Blonde, Butcombe Bitter and Wye Valley HPA. I tried the first three, all of which were in good nick.

Then back to the station for the trip home, with the trains on both legs busy enough, but much less crowded than earlier in the day. I noticed a long goods train laden with cut logs trundling through Chester Station, which was certainly to me at least an unusual sight. I was told it was a regular working from Carlisle to the Kronospan fibreboard mill at Chirk south of Wrexham. So an interesting and enjoyable day out, and hopefully if we are not plunged back into lockdown I will be able to make more use of that Senior Railcard in the remainder of the year.