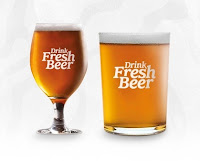 This week is Cask Beer Week and, as Roger Protz reports, the Society of Independent Brewers (SIBA) have launched a new initiative to promote cask entitled Drink Fresh Beer. At first I thought this was just another glib marketing gimmick, but on looking further there’s a lot more to it.

The Achilles heel of cask beer has always been inconsistent quality over the bar, and by far the biggest problem is slow turnover, leading to tired, lacklustre beer. At its best, fresh cask is great, but all too often it falls far short of that, and you just don’t know when ordering it. Most people in the industry acknowledge this issue, but are always very reluctant to put it into practice because they are too attached to offering a wide range of beers. As I have written in the past, it’s a case of waiting for the other guy to blink first.

Now, this SIBA scheme is seeking to address this issue head on by providing customers with the details of when a beer was put on sale.

Once they reach the bar, an AR-scannable pump clip will help beer drinkers learn more about their favourite drink, how far it has travelled to the pub and when the cask was freshly tapped.

Hopefully this information will be made more obvious than having to fiddle about with a QR code, but the principle is there. This is something that I have suggested in the past in a somewhat mischievous spirit, and I probably never thought it would actually happen. The report goes on to say:

To ensure the quality of beer across the venues involved, pubs participating in the campaign will be asked to sign up to the Fresh Beer Promise. Alongside campaign materials at the Point of Sale in their pub, they will commit to stocking at least two handpulls with a rotating third cask on tap and ensure a high standard of freshness by promptly replacing casks and take part in initiatives to improve quality.

Maybe it needs to be extended to those pubs that only have the turnover for one or two lines, but the intent is very clear. It’s unpredictable as to what effect knowing when a cask was tapped would have on customer behaviour, but people would soon find out through a process of suck it and see. They wouldn’t automatically choose the one-day beer over the two-day one, especially if it wasn’t their preferred style, but if there was nothing on the bar under five days they’d probably be looking at the lager and Guinness pumps or going elsewhere. It would give pubs a rocket up the backside and lead to a substantial and overdue curtailment of over-extended beer ranges.

It’s probably wishful thinking, but it would be good to see this initiative rolled out across the entire industry, particularly to Wetherspoon’s, who in my experience are the biggest culprits when it comes to selling stale beer. And, if a pub operator won’t sign up, it will be a clear indication that they have something to hide.

Obviously, rapid turnover is not the be all and end all of beer quality, and there are other issues that need to be addressed such as hygiene, temperature and conditioning time. There is no guarantee that a fresh beer will be a good one, but it’s pretty certain that a stale beer won’t be.

Over the summer there been an initiative called The Cask Project which has sought to promote the category while at the same encouraging debate about the issues surrounding it. While much of it has been very worthwhile, it has to be said that some has failed to appreciate the fundamental nature of the product. For example, one strand was “There’s a cask beer for everyone” which, in the reality of the typical pub there simply isn’t, as they won’t have the turnover to stock more than a couple, which will probably be a hoppy golden ale and a classic brown bitter. If you want that 8% mango sour you’ll have to look for it on keg.

What is needed, surely, is to go back to basics as to exactly why people should choose cask ahead of other beers. Back in the early days of CAMRA, the main priority was trying to convince people why cask ale was better than its keg counterparts. Nowadays, mainstream keg ales are a sector in steep decline, and the issue is more of how to appeal to people who drink lager, Guinness or cider. The key USP has to be saying that, at its best, cask offers far more richness, depth and complexity of flavour. And, of course, although this is very much in conflict with the current zeitgeist, it is a link with this country’s brewing traditions.

No doubt it will turn out to be a damp squib, but if the fresh beer initiative took off it could be a real shot in the arm for cask beer.