A crack in the edifice 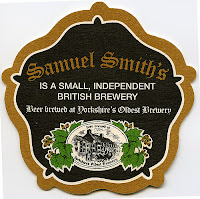 Last week, I was taken aback to go into a Sam Smith’s pub and find that they had started accepting card payments. On everything too, not just food orders, and with no minimum spend. I had heard a rumour that this was in the pipeline, but it still comes as a shock to see it actually happen. I’m not sure whether it applies to all their pubs, or just those serving food.

There’s maybe something to be said for wet pubs being cash only, as it’s a good way of keeping twats out. But, when it comes to ordering group meals costing over £30, many people will find it much more convenient to pay by card, and if a pub will not accept that form of payment they may well take their business elsewhere.

Indeed, I once saw the licensee of a Sam’s pub give a couple a personal cash advance, which they then refunded by a payment into her own bank account made by online banking using their phone – outside the pub, of course. That’s no way to conduct a business. And it seems that Humphrey Smith has finally noticed that this policy was damaging his bottom line and decided to relent. (It’s worth noting that, beforehand, there was a minimum spend that effectively restricted card payments to food orders, plus a surcharge. Card payments were discontinued when surcharges became illegal in 2018).

However, a policy remains in charge that arguably is even more offputting to customers , namely the complete ban on using smartphones or any other kind of electronic devices. This is something that most people will regard as completely ridiculous, and is a regular source of friction between staff and customers. I’ve heard staff apologise for having to remind people about it, but they have said they’ve had a warning from Humphrey and are left with no choice.

It would be fair enough if customers were asked to keep devices on silent, and take any animated conversations outside. But to pounce on them for simply checking the time of their train home is absurd. It is just the prejudice of an eccentric old man who seems to be living in the past. I’m prepared to put up with it while I read the paper over a pint or two, but it’s hardly surprising that it leads many people – including pensioners – not even to cross the threshold of a Sam’s pub.

Being put in a position of being expected to enforce ridiculous rules is unsurprisingly a major disincentive to people wanting work for the company as managers, and at least a third of the estate is currently boarded up, including some very attractive properties in prime locations. This piece about the lovely-looking Sir Gawain and the Green Knight in North Wales underlines the point. The whole sorry situation is described in this article by Glynn Davis, although it has since been superseded by the relaxation of the card payment ban.

Life would be very dull if all pubs were much the same, and for many years Sam’s have sought to cultivate a distinctive appeal, which is summed up by Anthony Avis in his book The Brewing Industry 1950-1990: “The custom is aimed at the older person, who relishes a good pint, with home-produced food if he wants it, and the surroundings to sit down and talk with his companions in unfashionable comfort – just like the brewery industry advertising of forty years ago represented pubs to be”. And, as I wrote back in 2017, which still holds true today:

What really makes the difference is the pubs. What I’m basically looking for in pubs is to be able to enjoy a quiet drink and chat in comfortable surroundings, and Sam’s deliver that much more reliably than any of their competitors. There’s no TV football crowding out everyone who isn’t interested, and no blarting piped music played for the benefit of the bar staff. I can’t recall a single example of a high-level posing table in a Sam’s pub, while bench seating and comfortable chairs are the norm.

It should also be added that Sam’s have been very respectful custodians of their pubs’ architectural heritage, particularly in contrast to a certain Stockport brewery. They have carried out a number of very high-quality refurbishment schemes in their London estate, and other parts of the country have benefited too, such as the Queen’s Head (Turner’s Vaults) in Stockport, which is a superb example of pub conservation with a unique interior.

Humphrey Smith is now in his late seventies, and one can only hope that when the time comes that his successors will respect the company’s distinctive heritage and appeal while removing the obstacles that deter people from both visiting their pubs and working for them. But there must be a nagging fear that they will end up throwing the baby out with the bathwater.