Many industry watchers were taken by surprise at yesterday’s news that Marston’s were to acquire the brewing interests of Charles Wells for £55m. While Wells are not particularly prominent as pub operators, they also own the Young’s, Courage and McEwan’s brands and are major players in both the cask and premium bottled ale sectors. Production figures are hard to come by, but my understanding is that they, alongside Greene King and Marston’s, formed the “Big Three” of British-owned brewers, and this deal will clearly propel Marston’s into first place.

Marston’s have a fairly good track record in keeping open the breweries they have acquired, as acknowledged in CAMRA’s very measured press release, and I’d say there is little immediate threat to either the brands or the Bedford brewery. It’s a large, modern plant and possibly has a brighter long-term future than some of Marston’s other sites.

However, the deal takes a major player out of the market and must, to some extent, reduce the amount of competition. Inevitably, some beers will be singled out for investment and promotion while others, while remaining in production, are allowed to linger on in zombie brand status without any active support. It isn’t an immediate hammer-blow, but in the long term it isn’t really going to be good news.

The reduction of competition will be felt less in the cask sector than in premium bottled ales, where Marston’s, as well as their own label, Banks’s, Jennings, Wychwood and Ringwood, have recently acquired Wainwright and Lancaster Bomber from Thwaites, and have now added the four Wells brands on top of that. A surprising proportion of the shelf space will now be occupied by the products of one company. And, if times become harder in the future, the pressure will come for rationalisation of both brands and production facilities. 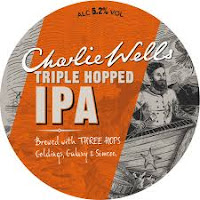 A few years ago, I was kindly given a number of samples of Wells & Youngs’s beers (as they then were) for tasting, which I reported on here. The conclusion was that they were a generally high-quality range of beers that demonstrated accomplished brewing skills and brought something distinctive to the market. It would be a pity if that were to be eroded over time. More recently they have introduced Charlie Wells Triple Hopped IPA, which is not really the “hop monster” the name might imply, but overlays a strong hop element on Well’s characteristic dry, malty base and is one of my favourites amongst currently available bottled ales.

By disposing of their brewing interests, Charles Wells will lose what made them distinctive, and end up just becoming yet another pub company.