Too much of a good thing?

Regular readers of this blog will have gathered that I strongly favour multi-roomed pubs with intimate spaces and cosy snugs over echoing, open-plan wastelands. However, the layout of any pub has to be considered in terms of how it actually works, and how the customers distribute themselves, and it has to be said that some designs, while looking good on paper, fall over in practice.

Last year, I praised Sam Smith’s for their refurbishment of the Swan at Holmes Chapel in Cheshire, which involved reinstating a number of small rooms. There’s a general description of the project here. However, even at the time, I have to say I felt a slight sense of unease that the individual rooms were too much separated from the bar. In my last post, I reported how the pub had recently dropped cask Old Brewery Bitter due to an insufficient level of sales, and my correspondent tells me that the locals are unhappy about the pub’s layout. 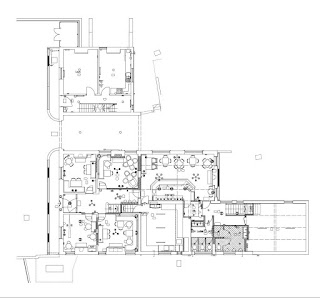 The plan above, courtesy of Michael Harris, (click to enlarge) shows the general arrangement. The bar counter is actually against the left-hand wall of the top right room, not the bottom, and the gents’ toilets are in a different place, but it still basically reflects how it is. Going in through the door on the left-hand side, facing the main road, there are four small rooms, two on each side of the corridor. The front bottom room was originally laid out as a vault, although I’m told the dartboard has now been removed. To the rear of that is a cosy snug with plush bench seating which to my mind is the best spot in the pub – see the photo below. This is where I encountered the amiable Porter, last year’s Pub Cat of the Year, who sadly vanished shortly afterwards. 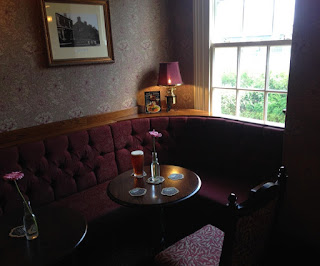 Further back, there is the room containing the bar counter, shown below, and a further room opening off it which is used as a dining room. Many pub customers either want to stand at the bar, or sit fairly close to it, but the room it’s in is fairly small and has no fixed seating, while the four rooms at the front of the pub feel quite remote and cut off from it. 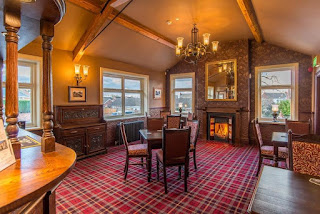 Thinking about other pubs, even those that have a complex, multi-roomed layout tend to put the bar at the centre of proceedings. This is certainly true in Stockport’s National Inventory pubs such as the Alexandra, Nursery, Swan with Two Necks and Arden Arms, plus others with a traditional layout such as the Blossoms and the Griffin in Heaton Mersey. The other week, I spent a few days in East Yorkshire during which I called in at two of Sam’s classic unspoilt gems, the Olde Blue Bell in Hull and the White Horse in Beverley. Both of these have plenty of small, cosy rooms, especially the latter, but both also have a long, centrally-located bar counter in a sizeable room with plenty of fixed seating, so customers can choose whether to be in the middle of the hustle and bustle or somewhere more secluded.

This is where the Swan falls down, and why a layout that looks appealing on the drawing board fails to work on the ground. I’m not quite sure how it was before, but my recollection is that it was more open-plan, with the bar counter on the left-hand side (top on the plan). To my mind, it would be better if the rearward top snug could be combined with the current bar room, and the counter moved so that it was against the left-hand wall. This would create a bigger bar area with more room for customers to circulate and mingle, and also bring the four remaining rooms into closer connection with it. But what’s done is done now.