Bitten by the Dog

Last Saturday, I organised a pub tour of central Birmingham for members of the Beer and Pubs Forum. It may not seem the most likely of destinations, but it has the advantage of being easily reached by train from all directions, and people travelled from the four points of the compass, the furthest away being Frome in Somerset. In fact, Birmingham is underrated as a beer and pub destination, and it was a very enjoyable day. It was good to meet both old and new faces. 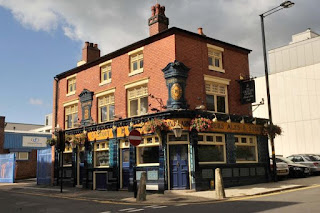 I’m not going to do a blow-by-blow description, but the general consensus was that the pub of the day was Black Country Ales’ Craven Arms just outside the Inner Ring Road near the Mailbox shopping complex. It’s a classic old-fashioned street-corner pub with an attractive tiled exterior and a cosy, welcoming interior with a good choice of beers.

This was actually the last pub on the itinerary, but, given that it was on the way back to New Street Station, a few of us decided to pop in to the BrewDog bar on John Bright Street. While I certainly have no ideological objection to drinking keg beer, this was actually my first visit to one.

It’s not really my cup of tea of course, but you can’t knock its success, and early evening on a Saturday it was packed out with a noticeably younger crowd than any of the pubs we had visited earlier. You do have to wonder, though, how many are really interested in the beer as opposed to just seeing it as a cool place to go.

All four of us plumped for two-thirds of the 6.5% Elvis Juice. This was the first time I have ever drunk a two-thirds measure in a pub and, at £4.95 (equivalent to £7.42 a pint), it was also the most expensive draught beer I had ever had. Described as a “grapefruit-infused IPA”, it was quite overpoweringly citrusy, with to my palate notes of apricot in there as well. I compared it with a particularly pungent Islay malt whisky, where you can appreciate the quality and distinctiveness, but wouldn’t really want to have more than one. I also couldn’t help wondering what it would be like in cask form. 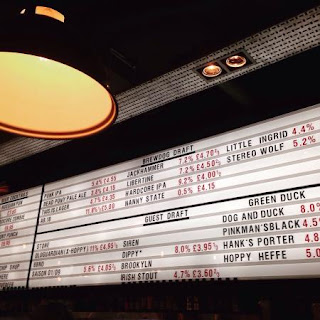 The beer board could be rather more informative. It doesn’t help that prices for different beers are quoted in different volumes, so it’s hard to make a comparison, and it would benefit from at least a brief indication of beer style. To be fair, there may have been more information in the menu booklets on the tables. (The image above is just a stock picture and not taken on the day). It’s also worth noting that, unlike many of their craft competitors, BrewDog’s beers tend to be crystal clear rather than murky.

An interesting experience, but not really a place where I’d become a regular visitor. And I think it will be a long time before they open a branch in Stockport...

Posted by Curmudgeon at 8:20 am