Tomorrow, a debate is being held in Parliament on the subject of the crippling level of beer taxation. This is an issue that has been adopted as a key campaign by CAMRA. The figures are certainly pretty damning. The UK only accounts for 12% of beer consumption in the EU, but pays 40% of the total of beer duty and, as shown by the graphic above, our duty level is more than three times higher than that of any other major brewing nation. 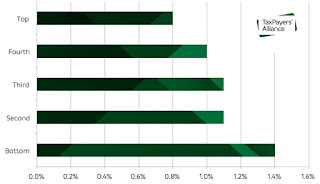 The Taxpayers’ Alliance has carried out an analysis which shows that the impact of beer duty falls disproportionately on lower income groups, even though they on average drink less. It is a highly regressive form of taxation.

However, while this is often presented as an issue that has a particular impact on the pub trade, it has to be remembered that exactly the same level of duty applies to the on and off-trades. If beer in the on-trade bears more tax per pint, that’s because the higher markup applied makes the total VAT figure higher.

And, looking into the detail, the proportionate burden of duty is much higher for beer sold in the off-trade. The main rate of beer duty is £19.08 per 1% per hectolitre. A pint of Carling (declared at 4.0% ABV) typically sells in a pub for £3.50, for which price you can get a pack of 4x440ml cans in the supermarket. If you break these prices down, you get the following:

So, from this, it is clear that any movement in duty, either up or down, will have much more effect on the final price of beer sold in the off-trade than in the on-trade. You can see this in the way prices moved during the period of three years when duty was either slightly cut or frozen. Those in the off-trade remained fairly flat, while those in the on-trade continued to ratchet upwards, albeit at a slower rate than before, because of the impact of cost increases in other areas.

Of course the rate of beer duty is far too high, and it should be brought down if resources permit, or at the very least frozen. It’s something that affects all drinkers, and at current levels there is already a serious problem with smuggling and illegal distilling, the latter of which can have fatal consequences. But nobody should imagine that this would do anything to change the relative competitiveness of the on and off trades.

And it is also the case that two of the countries with the highest proportion of on-trade beer sales, the UK and Ireland, are also those with some of the highest rates of duty.