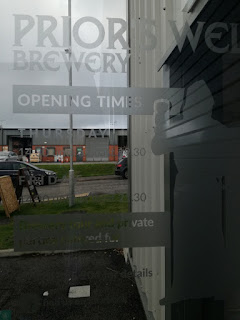 The Good Beer Guide is including ever more unconventional outlets such as brewery taps and micropubs that fall well outside the general understanding of a “pub”. Some of them are open for quite startlingly limited hours. Two that have already been visited by Martin Taylor on his GBG-ticking quest are the Rock & Roll Brewhouse in Hockley, Birmingham, and the Well in Mansfield Woodhouse, Nottinghamshire (shown), both of which are open for the grand total of ten hours a week. In fact, since the 2018 edition was published, the former has already changed its name from the Rock & Roll Tap House and reduced its hours from thirteen to ten.

It may well be the case that these are absolutely essential beer destinations that any enthusiast would be a fool to miss, but it has to be questioned exactly how much value they bring to the users of the guide. Its prime purpose is, at the end of the day, as a service to its readers, not as an award scheme to licensees, and you have to consider what people are actually looking for in it. As I said in this blogpost:


Many people use the GBG as a kind of woolly-jumpered version of the Good Pub Guide, and the food-serving pubs in the National Parks and other heavily touristed areas are likely to gain the most benefit. Likewise pubs in the centres of tourist-friendly towns like York and Stratford that don’t tend to be so well represented in the GPG.

I’m a regular buyer of the Guide, and the main purpose for which I use it is to find interesting pubs to visit when I’m away on holiday or out on day trips. One of the key things I’m looking for is pubs to have lunch when out and about. It can be very valuable in taking me to pubs that I wouldn’t otherwise have found. For example, nobody would ever come across the Crown at Churchill in Somerset by chance, but it’s a very worthwhile pub if you do find it. And, last month, it led me to the Anchor in Sevenoaks, Kent, which is a splendid little basic boozer that did me a perfectly serviceable Ploughman’s for just a fiver. Yes, as it’s on a main street, I might have chanced upon it anyway, but the GBG took me straight there.

I will look with interest at the more local entries, and sometimes they might prompt me to revisit a pub I had previously discounted, or to go somewhere that has appeared out of nowhere, but they are generally of less use to me – I already know which are the better pubs in my own area. But a pub that is only open for limited and inconvenient hours, serves no food and has no historic interest is unlikely to tempt me.

CAMRA have produced an internal document reviewing selection policy for the guide, which makes some important points:

Clearly, achieving a good standard of beer quality must be the starting point, but beyond that other factors also need to be taken into account. The guide should list the pubs that, if you were welcoming visitors to your area, you would say “You really need to visit the Dog & Duck”. A pub may well justify its entry in terms of being very special in one particular respect, and that’s certainly the case for some of the unspoilt heritage pubs. I certainly wouldn’t want, for example, to impose standards for minimum opening hours. But if the guide has too many entries that are very limited in terms of either their hours or their general offer, it reduces its usefulness to the people who are buying it.

CAMRA branches also should not be including pubs in the Guide as a reward for “showing commitment”. The sole criterion should be whether the entry is of benefit to the people who buy and read it, and there is no room for sentimentality or favouritism – as it says above, “Users first”. And, in my experience, if you argue that a pub should be included in recognition of making an effort, it’s generally a good sign that it shouldn’t be.