In the land of Bass and Pedi – Part 2

We pick up our story in the back room of the Vaults in Uttoxeter. The next pub on the itinerary was the Plough on Stafford Road, but this was the best part of a mile out of the town centre, and generally in an uphill direction, which didn’t look a particularly appealing prospect on a showery afternoon. However, our luck was in as Paul Mudge had managed to persuade his wife Jackie to drive out from Stafford to give us a lift, which was extremely generous of her. He said that he was fortunate to be married to someone who literally drove him to drink! 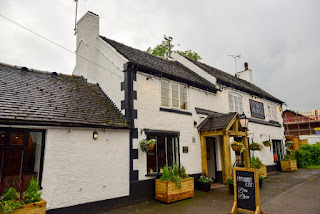 The Plough is a white-painted roadside pub that presumably was there long before the suburban housing that now surrounds it. Inside there’s a narrow area with a few posing tables in the centre by the bar, a dining area at a lower level to the left and a plainer public bar-type area to the right, where we managed to find a table. It’s a pleasant, although not strikingly plush, pub, and taking a look at the menu some of the prices seemed rather steep, especially compared with those in the Bank House. “Carry on Wayward Son” by Kansas was playing as we walked in.

There was a little more choice of cask beers here, with Pedigree being joined by Hop Back Crop Circle, Wainwright and the local Uttoxeter American IPA. The American IPA and Pedigree were both pretty good, although the latter fell a little short of that in the Bank House. While it’s a decent pub, we weren’t convinced it would have really justified the walk out of town. Reading the description on WhatPub, it was rescued from a period of closure by new owners at the end of last year. 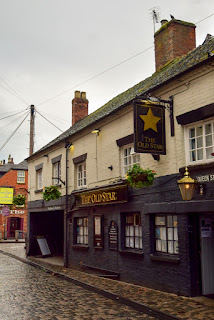 We were duly decanted back in the town centre and made our way to the Old Star on Queen Street, a narrow street that is separated from the main part of the market place by a block of buildings. This has been altered rather more than some of the previous pubs, but retains a rambling interior with various different areas including a pool room with a tiled floor and bench seating at the rear. The atmosphere seemed a little more lively, and we were greeted by loud music which seemed to be majoring on the Cure’s Greatest Hits. One of us changed the mood by putting “Back in Black” by AC/DC on the jukebox.

On the bar were Doom Bar and Jennings’ Cumberland Ale alongside Bass. The Bass was pretty good, but the person who chose the Cumberland found out that in Uttoxeter it’s best to stick to Bass or Pedi as they’re likely to turn over much quicker. It wasn’t returnable, but rather lacklustre. 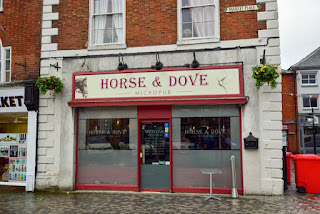 Our next call was the Horse & Dove which is just around the corner on the aforementioned island block of buildings. While it claims to be Uttoxeter’s first micropub, it doesn’t conform to the purist Herne model, being a fairly spacious single room that in fact is larger than the front two rooms of the Vaults, with all the seating at a normal height. It has lager, spirits, piped music and separate gents’ and ladies’ WCs, so realistically is just a smallish modern bar. It was fairly busy, as you might expect at teatime on a Friday. There were six cask beers in total on the bar, from which we selected Wantsum Yellowtail, Uttoxeter Groundbreaker and S43 Raven from Country Durham, all of which were rated good. 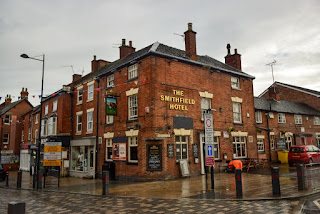 There now followed the longest inter-pub walk of the day, taking a full four or five minutes up the pedestrianised High Street to the Smithfield. This is a substantial redbrick street-corner pub with a public bar at the front and a larger lounge stretching a fair way back along the side of the building. This was still pretty basic, with a bare wooden floor throughout, and had a distinctly lively atmosphere. This was the busiest pub of all those visited on the day.

The soundtrack seemed to be “Hits of the 70s”, including “Sweet Caroline” by Neil Diamond and “Wig Wam Bam” by The Sweet. It could be said that Uttoxeter’s musical tastes are another aspect of the town that are stuck in something of a time warp. We encountered a very large, friendly retired greyhound, which must count as best pub animal of the day. The sole cask beer was Pedigree, which again was pretty decent. 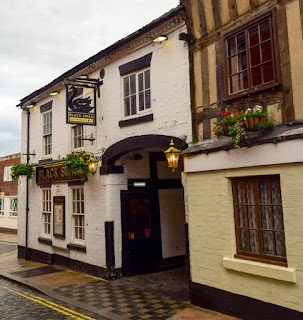 We then returned to the market place to the Black Swan, which is on a side street very close to the Old Star. The pub names in this part of town must be a source of confusion. This has a side passageway running the length of the pub, with a single door giving access to two rooms, both of which are labelled “Bar” and contain a dartboard. We chose the small and cosy front one; the one at the rear is much more spacious, with extensive bench seating around the walls.

“Fire and Ice” by Pat Benatar was playing as we walking in; Peter Allen later put “Stay With Me Till Dawn” by Judie Tzuke on the jukebox, as he was going to see her in concert in Birmingham the following night. There followed a predictable discussion about various singers’ ages – Judie Tzuke is, I was pleased to learn, three years older than me. More very palatable Bass, although Peter had by this time had his fill of BBB and plumped for that other classic product of Burton, Carling.

We thought we would finish off the day by calling in the only pub in the town centre we hadn’t yet done, the Steeplechase. Previously called the White Horse, this is a modern pub closing off the eastern end of the market place, which internally has been knocked through into a single cavernous room. However, the two pumpclips on the bar had been turned room, and the barman seemed to sense what we were looking for and told us without prompting that there was no real ale. So we returned to the Vaults for a final drop of Bass before the short walk back to the station. Unlike our last trip to Rugby, all the homeward trains were on time.

So another very enjoyable day out, with good beer, good pubs and good company. Some may balk at the limited choice of beer available, but it’s rare that you get to sample two of Britain’s classic ales on their home territory, and get to compare them between different pubs. It’s also unusual to get the opportunity to visit every pub in a town centre which gives much more of a feel for the place than just dipping in to a select handful of highlights. Obviously they were all different, and catered to some extent to a distinct clientele, but every one had something to be said for it, and, as long as you stuck to Bass and Pedi in the pubs that served them, we didn’t encounter any sub-standard beer. Uttoxeter seems a fairly prosperous place and there was little evidence of vacant shop premises on the main streets.

Thanks to Peter Allen of Pubs Then And Now for all the photos used in this post.

Posted by Curmudgeon at 2:06 pm