Raise a glass to health 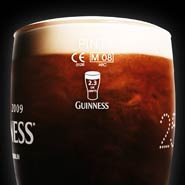 Apparently, Guinness are going to introduce branded glasses showing the number of alcohol units in a pint, in their case 2.3. “Diageo, the owner of Guinness, said it hoped that the move would help drinkers to stay within the Government’s recommended guidelines on alcohol consumption.” So, if you order a second pint, do you get a patronising lecture from the barperson on how you’re slowly killing yourself? It is depressing how major drinks companies are happy to kow-tow to the ludicrous official messages on “safe drinking levels”, especially as they know very well that if everyone adhered to these guidelines, their business would go down the pan.

It may be some consolation to the health-conscious that in real life you won’t get anywhere near 2.3 units from a pint of Guinness because the thick head means that it is typically at least 10% under-measure - just look at the picture. It is scarcely credible nowadays to think that in the mid-80s my local Hydes pub served Guinness through metered pumps into oversize glasses.