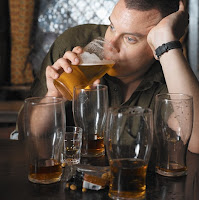 CAMRA makes a big point of pubs providing a “controlled, responsible drinking environment” as opposed to the uncontrolled free-for-all of consuming alcohol bought in the off-trade. However, in real life it isn’t anywhere near as clear-cut as they suggest, and it looks dangerously like wishful thinking. The only pubs that consistently live up to this standard are some of the more genteel rural dining establishments. Even in the best-run “community local”, a species of pub championed by CAMRA, you will routinely see people drinking enough alcohol to qualify as a “binge” in the government’s description, some of whom will end up getting boisterous, or the worse for wear, to the extent that some might even say they were “drunk”.

And the circuit bars that on Friday and Saturday nights spill out drunken, brawling, puking young people on to city centre streets don’t really fit the description at all.

On the other hand, people quietly wasting their livers on The Claymore and Tennent’s Super in the comfort of their own homes aren’t causing trouble on the streets. And you can’t tell me all that wine sold by the supermarkets ends up with the empty bottles thrown at the neighbours. Most off-trade alcohol is consumed responsibly and overall is probably far less a source of disorder than on-sales.

It is important to distinguish between “problem drunks” and “problem drinkers”. There is an overlap between the two, but the former are people who cause a public nuisance when drunk, whereas the latter are those whose long-term drinking poses a major risk to their health. They are different problems which require different solutions, and the first category are primarily people who do the bulk of their drinking on licensed premises.

It is certainly a valid point to say that well-run pubs enhance communities and promote an attitude to drinking of keeping within your limits and knowing when you’ve had enough, but CAMRA must be careful about making too much of this as all too often the reality falls well short of the rose-tinted stereotype.
Posted by Curmudgeon on April 03, 2009