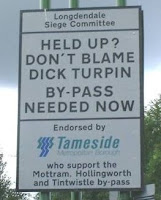 Anyone who has ever travelled by road between Manchester and Sheffield will have spent rather more of their life than they would wish to queueing up for the traffic lights in the centre of Mottram-in-Longdendale. No doubt on one corner of the crossroads they will have noticed a rather tired, shabby-looking Robinson’s pub called the Junction. I once went in over twenty years ago and it wasn’t very appealing then, having suffered Robinson’s typical tasteless 1970s modernisation. I doubt whether it has improved much since, and now it is reported that it is going to close and be turned into four terraced houses, with a further eight houses being built on the car park. The reasons cited were “the smoking ban, the credit crunch and changes in licensing law”.

You might have thought being situated in a Conservation Area at the centre of a prosperous commuter village, and on a major trunk road too, was an ideal situation for a pub. However, Mottram doesn’t seem to be a happy hunting ground for pubs, with the White Hart just up the road reported to be struggling too. While undoubtedly more of an effort could have been made with the Junction, I suspect in the final analysis a pub situated in the middle of a twelve-hours-a-day traffic jam is never going to be very appealing whatever you do with it.

Local residents fed up with the traffic will be further dismayed to learn that plans for the long-promised bypass once again seem to have been kicked into the long grass.