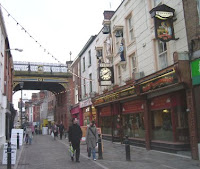 There has been a lot of discussion in the local CAMRA branch recently about how moribund Stockport’s “night-time economy” is. It seems as though, if people want a good night out, they head off to Manchester rather than remaining in the town. There is the tacky nightclub near the station, but even there in the “Grand Central” complex we have seen Fatty Arbuckle’s and Burger King close in recent years. The once-vibrant Market Place scene seems to have died on its feet, and Sam’s Bar is closed and boarded. There is a remarkable dearth of restaurants of any kind beyond McDonald’s in central Stockport – how come it can’t support a Pizza Express when much smaller Cheadle manages to?

The rest of the town centre away from Grand Central is usually very quiet, even on weekend nights. Some pubs such as the Crown, Arden and Railway do well, but in general it is a deadhole. This was a point reinforced by a recent crawl of pubs on the fringe of the town centre, where we came across two (perfectly decent) pubs that were largely empty between 9 and 10 on a Friday night. The smoking ban doesn’t help, of course, but that isn’t a good sign. Little Underbank, right at the heart of the town, was eeriely deserted at 10 pm.

One major reason for this must be the effective banning of traffic in the town centre streets. Pedestrianised streets may work during normal shopping hours, but in the evening they turn an area into a dead zone. If the dreaded rising bollards on Underbank were permanently retracted after 4 pm, and traffic was allowed along Princes Street after 6 pm, I’m sure it would make a big difference. However, you have to be careful what you wish for, as inevitably a revitalisation of night-time Stockport would lead to the spread of chain bars and takeaways.

Rather than this, maybe what Stockport needs to do is to promote its unparalleled collection of high-quality traditional pubs rather than just trying to ape every other town centre. “Stockport – the civilised night out” might not be too bad a slogan.
Posted by Curmudgeon on April 20, 2009