The answer to everything - ban it! 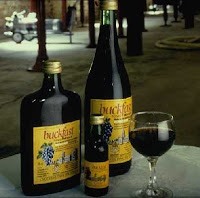 After the recent furore, it was no surprise that someone should come out and say that Buckfast Tonic Wine should be banned entirely. Not just in Scotland, but across the whole of Europe. And equally no surprise that the person calling for the ban was a female Labour MEP, Catherine Stihler, who no doubt comes out of the same mould of Righteous harpies as Hairy Moneyball, whom Dick Puddlecote takes great delight in baiting.


A Scots Labour MEP yesterday called for a Europe-wide ban on Buckfast. Catherine Stihler urged a powerful European Parliament committee to impose an all-out ban on alcoholic drinks which also include caffeine. The move follows growing concern over Buckfast tonic wine. The drink is 15 per cent alcohol and contains as much caffeine as eight cans of cola in a standard bottle. Buckfast's distributors insist the product has become a scapegoat for anti-social behaviour.


I’m sure all the old biddies who drop in to Buckfast Abbey in pastoral Devon for the occasional bottle of their favourite pick-me-up would be very disappointed to find it no longer available. And, even if we accept the proposition that a combination of alcohol and caffeine turns people into raging madmen, who’s to say you can’t get the same effect from a vodka Red Bull? Or, for that matter, an Irish coffee? And would they have to ban Bailey’s as well?
Posted by Curmudgeon on January 27, 2010