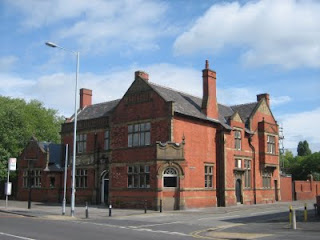 Here’s a picture of the now-closed Ash Hotel in Heaton Norris, Stockport, scene of the last night smoke-in described here. It’s a rather magnificent redbrick Edwardian building in the Jacobean style. I hadn’t really appreciated before taking this photo how impressive the side elevation was as well. At one time it had its own bowling green at the side, later used as a beer garden.

By the time I first visited, it had been extensively altered inside, but it still retained a possibly unique free-standing hexagonal handpump stand in the space between the lounge and vault bar counters, and a “Cocktail Bar” in the left-hand lounge which was typical of 1960s attempts to make pubs appear more sophisticated. It later received a further nondescript refurbishment which involved reducing the public area and taking the large rear vault out of use. Now it will never trade as a pub again – reports say it is to be used as a bakery.
Posted by Curmudgeon on May 21, 2011