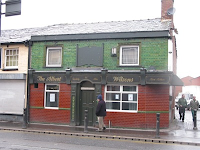 Following my last post about traditional pub interiors, I dug out my copy of Vintage Pubs and Real Ale in Greater Manchester by Peter Barnes, published in 1988. It even lists me (with my correct current phone number) as contact for the local CAMRA branch inside the back cover.

It is not a beer guide as such (and indeed includes a smattering of keg pubs) but instead sets out to list 150 pubs that still offer a “traditional” atmosphere, which it defines as:
Of the pubs listed, some, such as the Duke of Edinburgh in Bradford (Manchester) and the King William IV in Partington have been demolished, while the Horse & Jockey at Delph is now a mouldering ruin. Others, such as the Queens in Cheadle and the Roebuck in Urmston have been renovated out of all recognition.

But there are plenty that have come through the intervening 23 years pretty much unscathed. Of the nine pubs listed in Stockport, the Alexandra, Arden Arms and Swan with Two Necks retain their National Inventory status, the Armoury and Blossoms, while altered to some extent, still have a pretty traditional feel, the Florist, Pack Horse and Red Bull have been more substantially, although not insensitively, remodelled and the Gladstone (now Bishop Blaize), while little altered, became very run down and is now closed and boarded. It is perhaps surprising that the Tiviot, which is still like stepping back into the 1950s, was not included.

Nearby, the National Inventory listed Nursery in Heaton Norris retains its fabric intact, while the Griffin in Heaton Mersey has had an extension added on one side, but the original four-roomed pub, with its magnificent curved wood-and-glass bar counter, is little changed.

It is interesting that at least three current National Inventory pubs – the Grapes in Heywood, the Queens Head (Turners Vaults) in Stockport and the Turnpike in Withington – do not appear, although in the case of the Turnpike its original early 60s decor may not have screamed “unspoilt” back in 1988.

The description of the Albert in Withington is something that would be unthinkable nowadays on at least two levels:


The Albert is a pub where a working man can relax and not worry where his cigarette ash goes. It is a simple, small, low-ceilinged room, formed out of even smaller rooms in the past, with a central doorway. Thus the pub is a vault. You are not likely to see any woman in here. The furniture is very basic, the television is very prominent and the main colours are dark brown and nicotine.

It’s still going, although no longer serving cask beer and obviously not permitting smoking, and I suspect you would find much the same type of clientele in there. The picture on StreetView appears to have been taken in the midst of a thunderstorm.
Posted by Curmudgeon on May 14, 2011