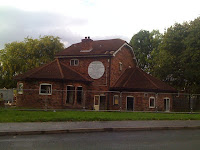 There’s a newish blog from the creators of Pubs of Manchester called Manchester Estate Pubs, which is basically a collection of photos of post-war pubs (not all estate pubs as such) in Greater Manchester and its environs. Probably well over half of the pubs pictured are now closed, although a few continue to thrive.

It’s also noticeable how frankly unappealing they all look. Indeed, while some licensees manage to do a good job with what they have to offer, it’s difficult to think of a single purpose-built, free-standing pub from the post-war era that you would actually want to go out of your way to visit for its ambiance. (Some modern pubs that were converted from other uses, or which form part of larger developments, do rather better) If they are “good pubs”, it is despite their architectural qualities.

In fact, these pubs were often designed with considerable care as to the decorative materials used, and how the different spaces were meant to work and related to each other, but somehow the soul seemed to be left out. Social changes over the years and insensitive refurbishments, in particular knocking them through into one massive antiseptic room, have steadily eroded both their function and character.

Most of the surviving inter-wars pubs which retain their original layout and fittings do considerably better on the atmosphere front but, as with their post-war counterparts, most of the bigger and more soulless ones have long since been demolished or gutted beyond recognition.

(The photo is of the Roundhouse in Heaton Norris, only just over a mile from me, which was demolished a couple of years ago and is still a patch of waste ground)
Posted by Curmudgeon on March 02, 2012