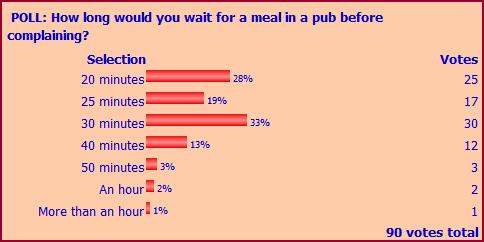 On a few occasions recently I have been having a meal in a pub with friends or relatives, and noticed the clock ticking up over 25 minutes from placing the order, and no food having appeared. On one occasion we asked a waitress and were assured that it was “just on its way”, finally arriving about five minutes later. But there comes a point when you start to wonder whether your order has been forgotten, which I have experienced more than once.

So I thought I would ask what was the maximum waiting time people thought was acceptable for a food order in a pub. There’s a fairly wide spread of answers, but there seems to be a general consensus that it shouldn’t go beyond half an hour. The person who wouldn’t mind waiting more than an hour must either be extremely patient or have nothing better to do.

Obviously there has to be a bit of horses for courses here – you would reasonably expect to have to wait longer for a main meal cooked from scratch than for a lunchtime snack.

One local pub in the past offered a guarantee that your food would appear within 20 minutes of placing the order but ended up having to withdraw it after failing too often.

I would also say that, in my experience, while Wetherspoon’s bar service is often somewhat lacking, once you’ve actually placed your order the food tends to arrive fairly promptly. Obviously it’s only microwave cooking, but even so you need to get your kitchen procedures right.
Posted by Curmudgeon on March 17, 2012