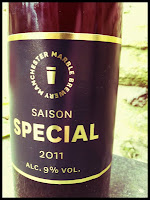 A while back I won a prize of a 750 ml bottle of Marble Saison Special, weighing in at a hefty 9% ABV. There seems to be a vogue for these big bottles, but surely they’re a most inappropriate form of packaging, especially for beers of that kind of strength. They’re not screw-caps, so you can’t drink half and keep the rest for later, meaning you’re faced with having to consume what is effectively the equivalent of a full bottle of wine at a sitting. And, given that it’s bottle-conditioned, you can’t even pour out one glass and stick the bottle back in the fridge, you have to find a vessel into which you can decant the whole lot. A 330 ml or 375 ml bottle would make a lot more sense, and also be more affordable.

Although I had let it stand for a couple of months, and the beer appearing clear from outside, removing the cork caused some fobbing and disturbed the sediment, so I ended up with some very murky beer in spite of careful pouring. A good thing I’m well-stocked with bogroll. This seems to be my fate with any bottle-conditioned beer produced by micro-breweries. I can’t comment on the taste – it was an overpowering mixture of yeast and alcohol. Sadly, not a beer I would spend my own money on.
Posted by Curmudgeon on March 03, 2012