A deep draught of history 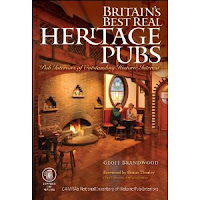 I have written before about how the creation of the National Inventory of Historic Pub Interiors is one of the best things that CAMRA has ever done, and will prove to be one of the most enduring. While there are still around 50,000 pubs trading in the UK, fewer than 300 retain an interior that is largely unchanged since the pub was built, or even since before the Second World War. Most of these pubs are still very much in business and very often the original interior continues to function very well while providing an atmosphere sadly lacking with so many soulless modern refurbishments. I am fortunate to have one of them as my local – the Nursery in Heaton Norris, Stockport, a splendid multi-roomed, wood-panelled suburban pub little changed since it was built in 1939.

Not before time, CAMRA has now produced a book covering all the National Inventory in a single volume, complete with extensive colour photography, for a very reasonable £9.99. There’s a fuller description (and a lower price for non-members) on Amazon, where it says:

Full-colour guide to over 260 pubs throughout the UK which have interiors of real historic significance - some of them stretching back a century or more. It is the first time ever that these pubs have been collected into a single volume. Illustrated with high quality photography, the guides extensive listings are the product of years of surveying and research by CAMRA volunteers dedicated to preserving and protecting our rich pub heritage. With a foreword by Simon Thurley, Chief Executive of English Heritage.

I haven’t actually laid my hands on a copy yet, but I certainly will be doing, and if the various volumes produced for individual regions are anything to go by it should be very attractively designed and well-written.

These pubs are an important part of both our architectural heritage and social history, and represent something that is much more relevant to the life of ordinary people than stately homes and castles, however splendid they may be. In the 1970s, a liking for “old-fashioned pubs” was very much part of the mainstream of CAMRA, but more recently, with the growing emphasis on new beers and breweries, they have perhaps somewhat slid down the pecking order.

It occurs to me that it might be a good idea for CAMRA, possibly in conjunction with the National Trust, to establish a separate organisation, perhaps called “Friends of Heritage Pubs”, which would allow people with an interest in traditional pubs to contribute directly to championing their cause and resisting unsympathetic and destructive alterations. This could well attract support from many people who aren’t specifically interested in real ale or indeed beer at all. There remains a widespread warm fuzzy feeling about olde-worlde inns that goes far beyond the ranks of CAMRA.