A whole world of beer out there 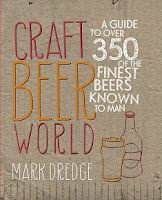 The last thirty or so years have seen a dramatic upheaval in the world of beer, with huge numbers of new breweries springing up and often pushing the boundaries in terms of strength, flavour and ingredients. This began with the micro-brewery movement in this country, but has found its spiritual home and greatest expression in the United States.

Now this “craft beer revolution” has been celebrated by Mark Dredge, author of the Pencil & Spoon blog, in his new book Craft Beer World – a Guide to Over 350 of the Finest Beers Known to Man, published by Dog’n’Bone Books at £16.99, although you can get it at a substantial discount on Amazon.

This differs from well-known beer bibles such as Michael Jackson’s New World Guide to Beer in unashamedly passing by the classic beers from established breweries in favour of an emphasis on “evolution, creativity and interpretation”.

It’s an attractive, chunky hardback lavishly illustrated throughout in colour. It begins with forty pages looking at the brewing process and other general topics such as beer and food matching, and then goes into a detailed look at examples of the various beer styles to be found around the world. For some of these, the author picks classic beers which in a sense epitomise the style, before going on to the various ways modern brewers have interpreted them, but there are some styles that are so new that classic examples simply do not exist. The descriptions are often enlivened by accounts of the occasions when Mark found himself drinking the beers.

At times the style may come across as a little gushing and over-enthusiastic, but it’s meant to be a celebration of beer, not a dispassionate survey, so that is part of its appeal. It is also, it must be said, very much oriented towards US craft brewing, and I’d say at least half the beers listed come from the States.

If there’s one criticism, it’s that the world of craft beer moves on so quickly that in a few years’ time it will seem out-of-date, while Orval, Pilsner Urquell and Adnams’ Southwold Bitter will still be going strong. But the constant spirit of innovation is in a sense key to the concept.

You may think “this isn’t really your bag, Mudgie, is it?” and you might well be right, as I’m a great respecter of tradition who tends to see beer in its wider social context and has never really “got” American craft beer at all. But it’s an attractive, intelligent, stimulating book that is well worth reading in its own right. If you’re someone who has got into the appreciation of beer via the world beer shelves and the BrewDog bars rather than quaffing murky pints of Old Snotgobbler in some bare-boards alehouse, it will be right up your street.

It’s interesting how the world of beer blogging is now translating across into the printed word, with Boak & Bailey also having their own book on the slipway ready for a launch next year. Don’t hold your breath for The Decline and Fall of the British Pub by yours truly, though.

Oh, and I bought this with my own money...