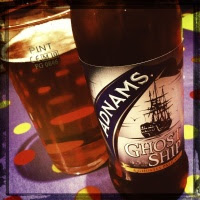 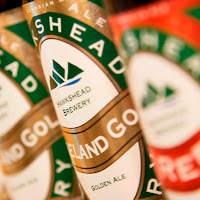 Adnams’ Ghost Ship and Hawkshead Lakeland Gold are two prime examples of the modern trend of “hop-forward” beers, that can be found in ordinary supermarkets and not just specialist beer shops. Interestingly, neither is particularly golden in colour – both are more a light amber, maybe similar to Robinson’s Unicorn, and certainly darker than classic golden ales such as Thwaites’ Wainwright.

They are of similar strength, Ghost Ship being 4.5%, and Lakeland Gold 4.4%. Both are assertively hoppy, with the Ghost Ship having more of the characteristic “New World” grapefruit notes, whereas Lakeland Gold leans more towards old-fashioned British flinty bitterness. It reminds me of what Holts Bitter could be like twenty-five years ago. Both are excellent beers, some of the most distinctive bottles to be found in mainstream outlets, but for me the Lakeland Gold slightly shades it. An absolutely superb drink, and one I’m happy to pay full whack for in Tesco even if not included in multibuy offers.

Another similar beer, although one that sadly seems to have disappeared from the supermarket shelves, is Thwaites’ Indus IPA, which is also more amber than gold.

Having said that, I’m not averse to a good malt-accented beer too, and I’ve become surprisingly fond of this recently.

Oh, and by the way, no free samples of any of these beers have been provided by the brewers...